•
Lifestyle - Nutrition
If you've ever wondered how to boost your longevity with food and lifestyle changes, you're in the right place. Inspired by Dan Buettner's research on Blue Zones, I'll share where the world's longest living people are living as well as how their diet plays into their overall health. As a bonus, I rounded up some of my favorite longevity-boosting recipes.

This is What the World’s Longest Living People Are Eating. It’s no question that the food we eat plays a huge part in our overall health. But, between diets like vegan, keto, paleo, plant-forward, and more, it can make anyone wonder what really is the best option for them. I always say that you and your trusted medical practitioner know you best, but if you’re really wondering what diet is the healthiest, you might want to look at what the world’s longest living people are eating.

Food is our body’s fuel. When we give our bodies processed, artificial foods it’s like putting low-quality gas in your car. It still runs, but it’s not going to work as efficiently or it might even stop working sooner than it’s supposed to. While aging is inevitable and something that should be cherished, there is some pretty interesting research about how food impacts our life expectancy.

Over a decade ago, researcher Dan Buettner discovered the five places around the world where people live the longest and dubbed them blue zones. I went over them a little bit in my recent post about a plant-forward diet, but since there is so much more to share I decided to create a whole blog post around longevity.

I’ll be sharing where in the world blue zones are, what they have in common, and some of my favorite blue zone-approved recipes. So, in the words of Queen, “Who wants to live forever?” 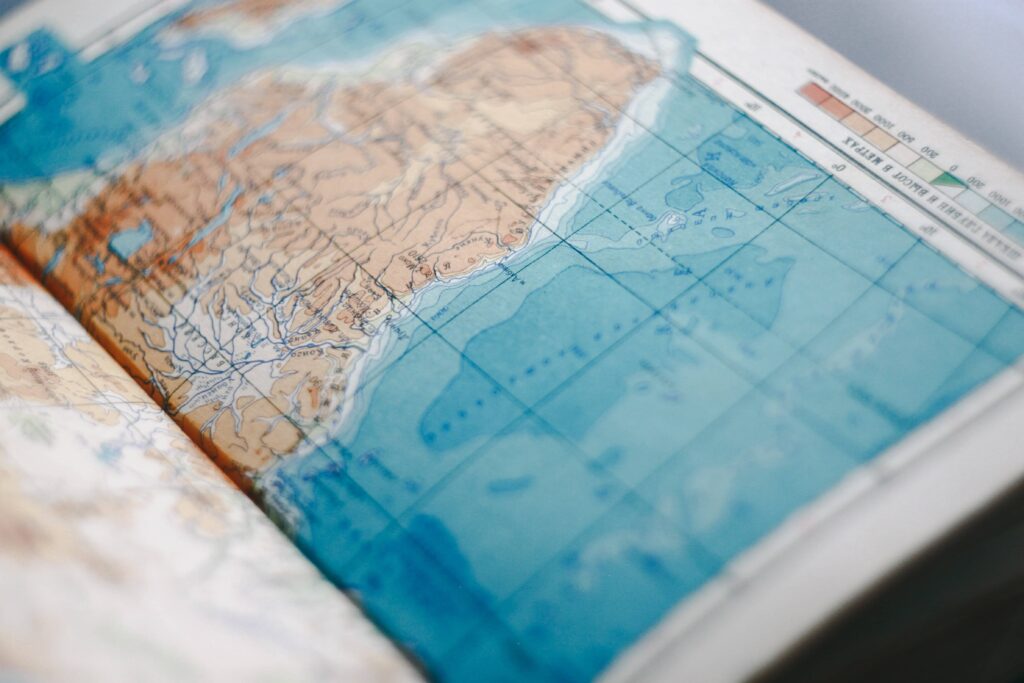 What is a blue zone?

A blue zone is a place where people are living much longer than average. The idea of blue zones actually originated before Buettner’s discovery of the original five blue zones. Gianni Pes and Michael Poulain first identified Sardinia as the region where there were the most males living to be one hundred. They started drawing blue circles on maps to show where the villages with the highest longevity were. They dubbed these spots blue zones.

Curious about what made these little Sardinian villages produce so many centenarians, Buettner went on a mission to find other places with similar populations. Eventually, he went on to find Ikaria, Greece, Loma Linda, California, Sardinia, Italy, Okinawa, Japan, and Nicoya, Costa Rica, which all had higher rates of longevity than other parts of the world.

Through his research, he was able to discover things their lifestyles all had in common including similar diets, close-knit relationships, moderate low-impact exercise, and even spirituality.

What are the world’s longest living people eating?

The blue zone diet is really similar to a plant-forward diet. One of the most important discoveries that Buettner made was that 95% of these groups’ diets were plant-based. They enjoyed things like seasonal fruits and vegetables, whole grains, and beans all year long as well as lots of leafy greens. The populations in the blue zones also ate much less meat, dairy, and eggs than we eat in the western world.

They ate an average of 15oz of meat per month and no more than 3 eggs a week. Animal products were often replaced with plant-based oils and protein-rich beans. Cow’s milk didn’t play a role in any of the long-living regions either. Sardinia and Ikaria rather depend on milk from sheep and goats.

Interestingly, the fat globules in goat and sheep’s milk are easier to digest than those in cow’s milk because they’re smaller. Also, even if you’re not lactose intolerant, a lot of people have sensitivities to the A1 type of casein protein found in cow’s milk. Goat and sheep’s milk contain the A2 type of casein, which has seen to be less inflammatory and not as allergy-inducing.

Since you’re getting less protein from animal products, the blue zone diet recommends eating at least a half cup of beans per day. The people living in the blue zones eat three to four times more servings of beans per day than Americans do, which is pretty wild! Other suggestions include enjoying a variety of whole, unprocessed grains, cutting back on sugar, eating fermented foods, snacking on nuts, and drinking lots of water. 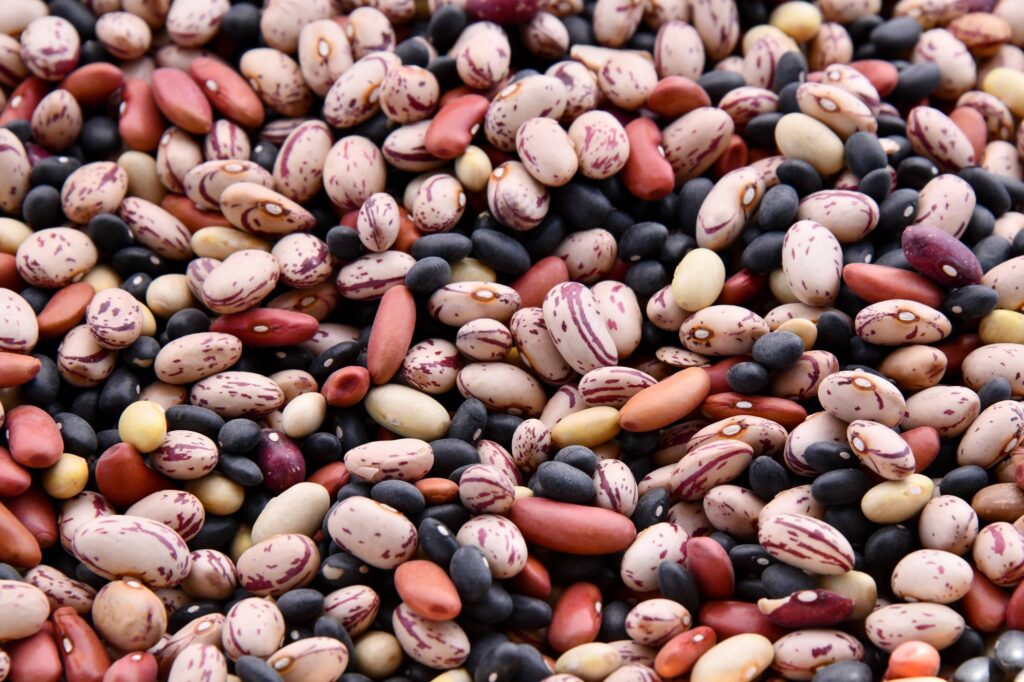 Before I dive into some blue zone-approved recipes, I want to share that lifestyle is equally important when trying to heal your body and live in health. While this blog post might be about what the world’s longest living people are eating, there are a lot of other healthy activities that the blue zoners participate in on a regular basis. Researchers estimate that by adding the blue zone lifestyle changes into your life, you can add 10-12 years to your life expectancy.

One of the most important things that you can do is move naturally throughout the day. Constant, low-impact motion like gardening, walking, and trekking uphill or simply upstairs are just a few examples of how the blue zoners move throughout the day.

Positive mental habits are also seen as super important. Feeling like you have a purpose, taking time to de-stress, and belonging to a community all have been shown to increase longevity across multiple populations. In fact, all but five of the 263 centenarians that took part in the longevity study belonged to some faith-based community. Denomination didn’t seem to matter, but connecting to a community and the idea of something greater could add 4-14 years to your life expectancy.

Researchers also found that connecting with loved ones on a daily basis helped shape healthier lifestyles. A lot of the blue zone populations still lived close to their parents and had a close-knit social circle. 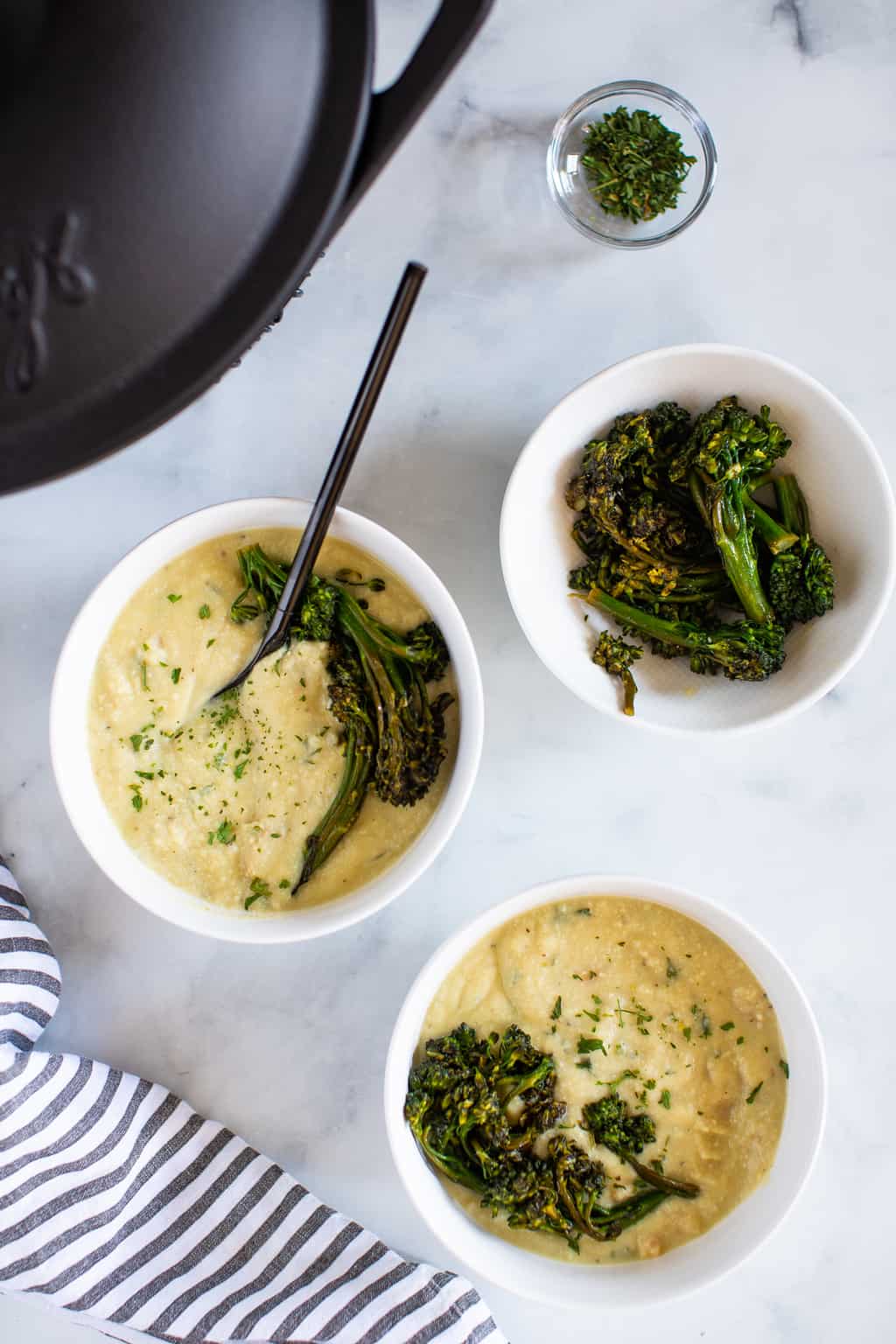 Woo-hoo! You made it to the good stuff. I find it so interesting to see how food and a healthy lifestyle play a part in our overall health and longevity, but I can’t wait to share these recipes with you. All of these recipes are inspired by what the world’s longest living people are eating and are filled with blue zone-approved foods like beans, whole grains, nuts, and leafy greens.

Beans reign supreme in the blue zones diet because of their high protein content and their low glycemic index. You’ll see a lot of bean-based recipes on this list, but I had to start out with this creamy and delicious Vegan White Bean Soup + Sautéed Broccolini. Crafted with cauliflower and white kidney bean, this soup is a super healthy meal that utilizes mostly pantry staple ingredients. The best part? It’s topped with easily sautéed broccolini!

The beans are back again with this Vegan Black Bean Taco recipe. Made with black beans, red cabbage, tomatoes, spinach, and jalapeños, this simple recipe packs a punch of flavor and spice. But, the star of the show might just be the creamy avocado dressing. It’s made with avocado, mango, basil, a bit of olive oil, and lemon juice, which are all things the world’s longest living people are eating.

I have always been a big meatball fan, so when I started cutting back on my meat consumption I knew I had to create a delicious and flavorful vegan meatball. I crafted this Vegan Chickpea Meatball using sauteed onions and garlic, chickpeas, quinoa, pecans, and nutritional yeast. This recipe is super versatile and contains both beans and nuts, which means it’s a longevity superstar. 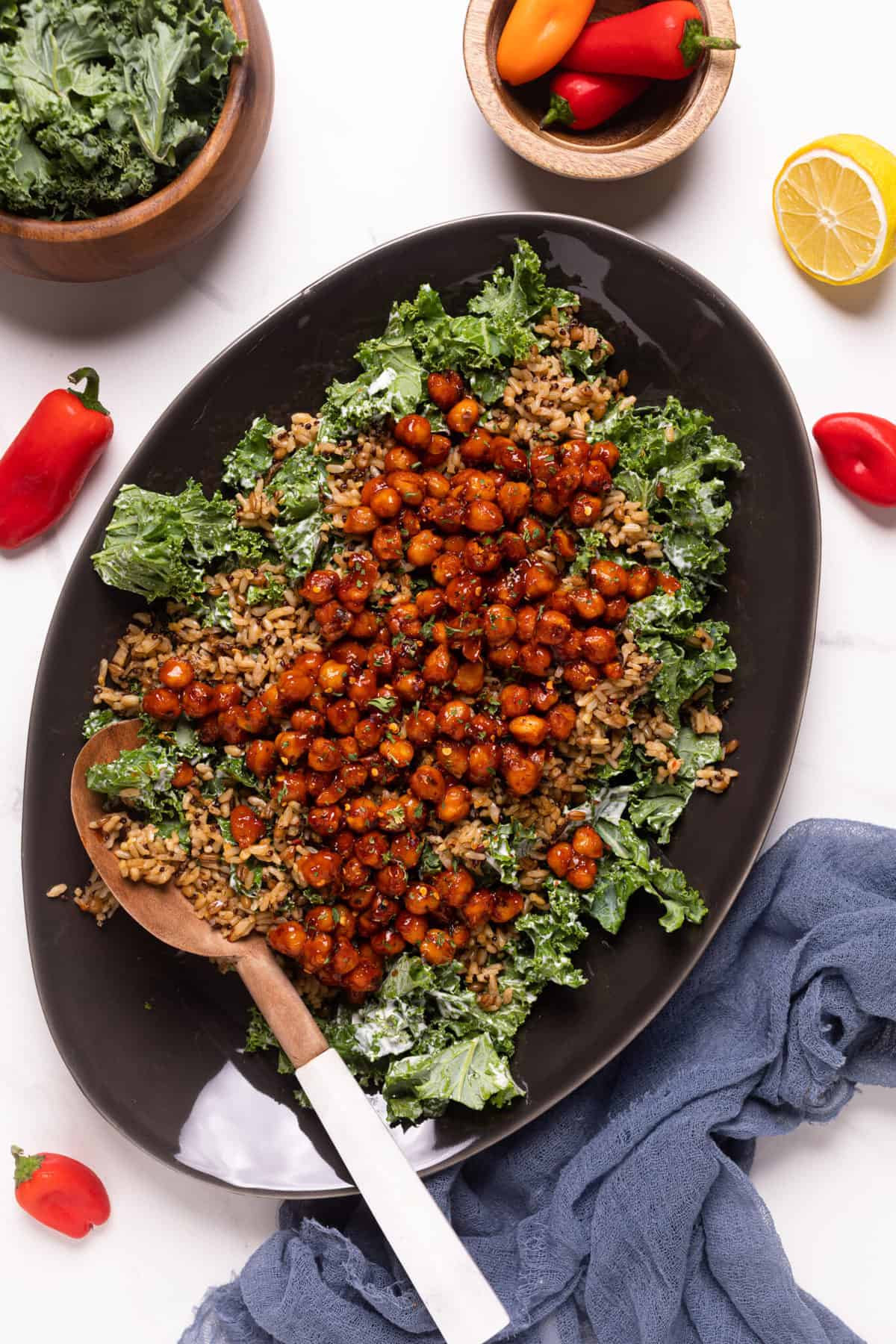 There is a lot to love about this Healthy Loaded Kale Salad with Spicy Chickpeas. Not only is it filled with flavor, color, and texture, but it is also filled with longevity-boosting foods. The best-of-the-best longevity foods are leafy greens like kale, which is the main character in this salad. But, added together with chickpeas, plant-based oil, and brown rice you’ll get in your serving of beans, whole grains, and healthy fats all in one place.

Since leafy greens are such a longevity powerhouse, it’s back again in this Creamy Garlic Broccoli Kale Rotini Soup. Soups are a staple in a lot of blue zone cultures as they are filled with veggies and relatively easy to make. This nourishing and creamy soup is made with veggies like broccoli, carrots, kale, garlic, red onion, and celery. It’s a must-try if you’re looking to boost your plant-based food intake.

If you can’t tell, I really can’t get enough of a good chickpea recipe and this Savory Chickpea Quinoa Buddha Bowl is no exception. This bowl consists of quinoa, mashed sweet potatoes, carrots, broccolini, roasted chickpea, and drizzled with a creamy cashew sauce. All of the veggies plus a healthy whole grain like quinoa will have you feeling great.

When it comes down to it, living a healthy lifestyle is about taking time to rest, eating well, creating strong connections, and stressing less. Since we’re not perfect, there are going to be days where these things don’t happen and that’s okay. This blue zone research wasn’t conducted to make you feel stressed about how your lifestyle is affecting your longevity. It’s more about learning the things that are proven to help you live healthier for longer.

If you’ve been struggling to find the right balanced lifestyle for you, it is a journey that will take some trial and error. But, I hope that seeing what the world’s longest living people are eating will provide some important insight to your next steps. 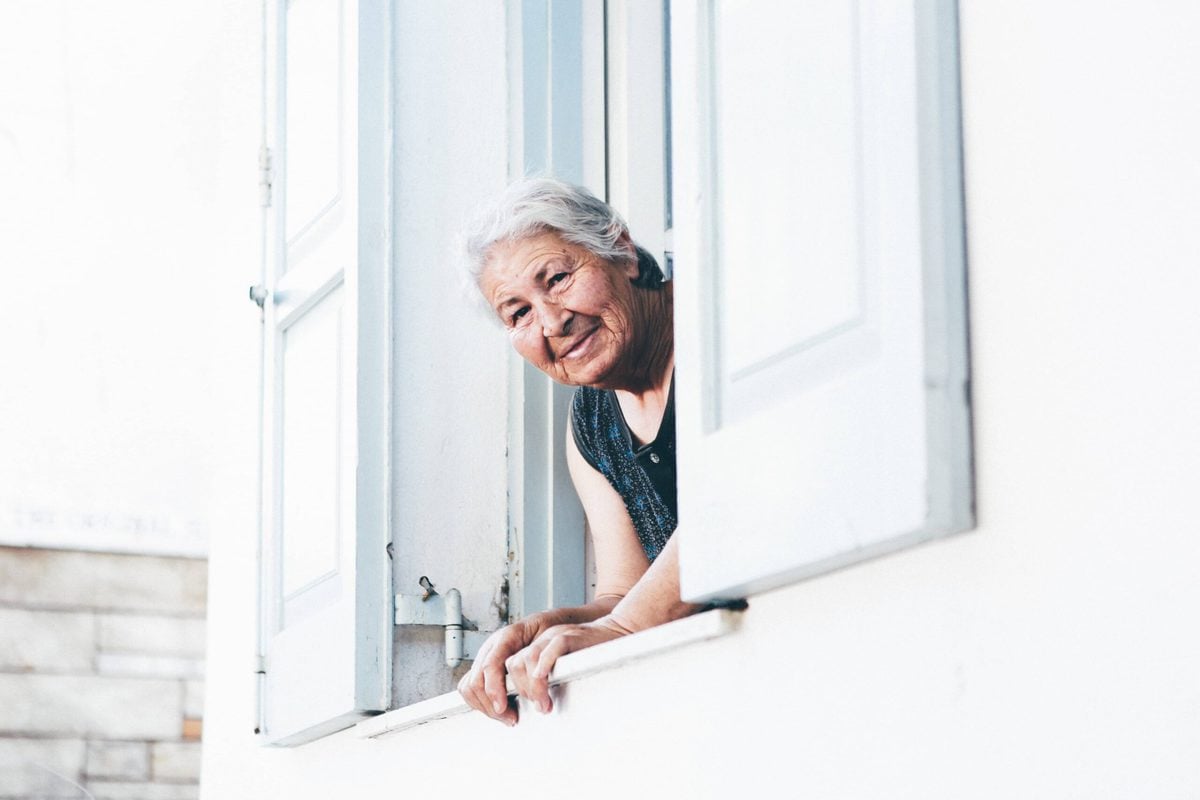