I’m the girl with a whisk in one hand and a cookie (or chicken wing) in another—literally! I create all of the recipes that you see throughout Orchids + Sweet Tea™️, styles everything for the perfect shot, while my Husband shoots it with our camera. I know. We’re a dynamic duo! To top things off, I’m a Jesus lover and Millennial Mama to a witty boy + pup who both always keeps me on my toes!

I’m a connoisseur of interior decorating (hence my passion for beautifully staged food photos—-it just oozes from my pores), Jesus lover, and I’m absolutely obsessed with things that are simple, YET have a healthy dose of sparkle + bling. Yes, both can co-exist. Haha.

Secondly, while I don’t come from a line of cooks or anything, one of the main ways that my family often came together growing up was through food, music, and laughter which inspired me to create a space that both uplifts and feeds those who choose to visit my little corner of the web.

As a teenager, I often experimented in the kitchen by making things that I wanted to eat as opposed to the traditional Jamaican foods that were often created in my home. After attempting (often failing) and then successfully mastering simple things like pancakes, biscuits, chicken wings, and other simple dishes, I realized that I truly enjoyed cooking in the kitchen and seeing what I could create.

Later on, after having my own family, I began experimenting even more with cooking and stumbled upon a real passion for food creation and thus Orchids + Sweet Tea was born. Shortly after the start of Orchids + Sweet Tea (and during my Postpartum Journey), I realized that my body could no longer successfully digest dairy + gluten at it’s best level. One of the evidences seemed to link to consistent monthly ovarian cysts and endometriosis symptoms (due to hormonal imbalances) that often were draining to suffer through for most of the month for a total of almost two years. Countless Doctor visits resulted in no solution until I finally decided to use my Faith in God and diet as a way of healing.

While I am still able to consume both dairy + gluten in small portions (here + there), I’ve taken greater pride in discovering many other ingredients which has helped my condition in such evident ways. Yes, it’s still a journey, but a journey that I am learning to embrace, love + eat through!

What foods to expect?

Because of my Southern roots + Jamaican background, you’ll find a lot of my old childhood favorites (a few which were made with a lot of love in the kitchen by my Grandma, Grandpa, Aunts + Uncles), along with many NEW FAVES that offer bold flavors and intricate combinations (often stumbled upon through trial, error, + a whole lot of grace!).

In addition, you’ll find a ton of different options (some Dairy-Free, sprinkles of Gluten-Free, an explosion of Vegan, and regular recipes; all using only organic, premium ingredients), which caters to my entire foodie community.

Overall, Orchids + Sweet Tea holds true to helping others discover their love journey through Foods and an overall Healthier Lifestyle; with a little Brooklyn Flair + a touch of Jamaican Flavor + a whole lot of Southern Charm.

Get to know me

To touch a bit on Lifestyle + Wellness —-for me it’s all about Mind, Body, + Spiritual wholeness. I’ve learned that oftentimes you have to lose to win–in the literal sense! Whether that loss comes from eliminating certain things from your diet for optimal health or killing certain relationships to ensure that the positive aspects of yourself are secure and protected, changing household essentials to ensure that your environment is green and non-toxic, or even setting aside time to cultivate your spiritual being through self-care or spiritual practices; whatever it looks like for you, rest assured that your losses will only bring forth new + fruitful gains if you choose to let them.

Jamaican Herbs That You Should Always Keep On Hand 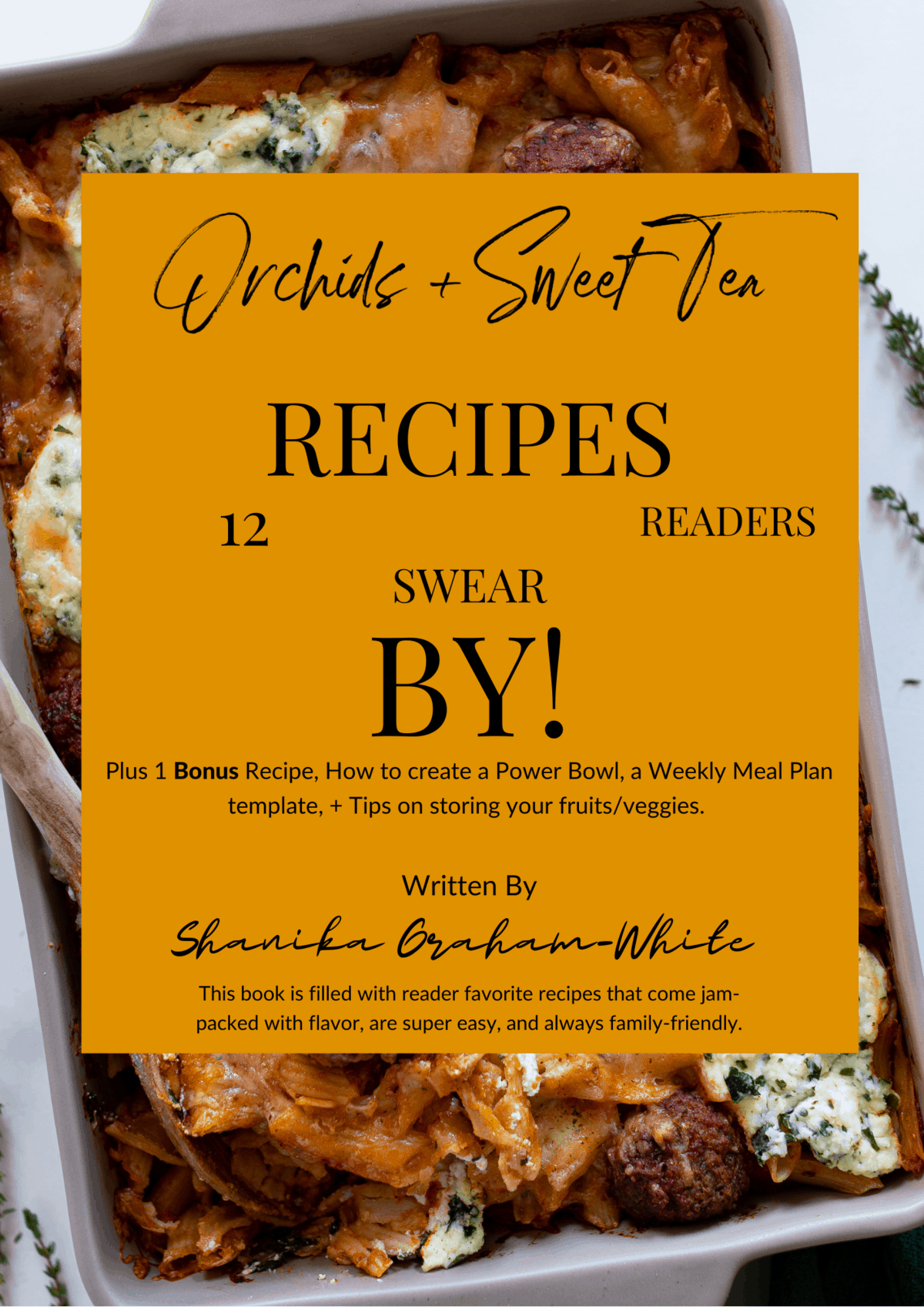 For our 12 Recipes Readers Swear By e-book!

And be the first to receive new recipes, cooking/baking hacks, cookbook announcements, + more straight to your inbox.