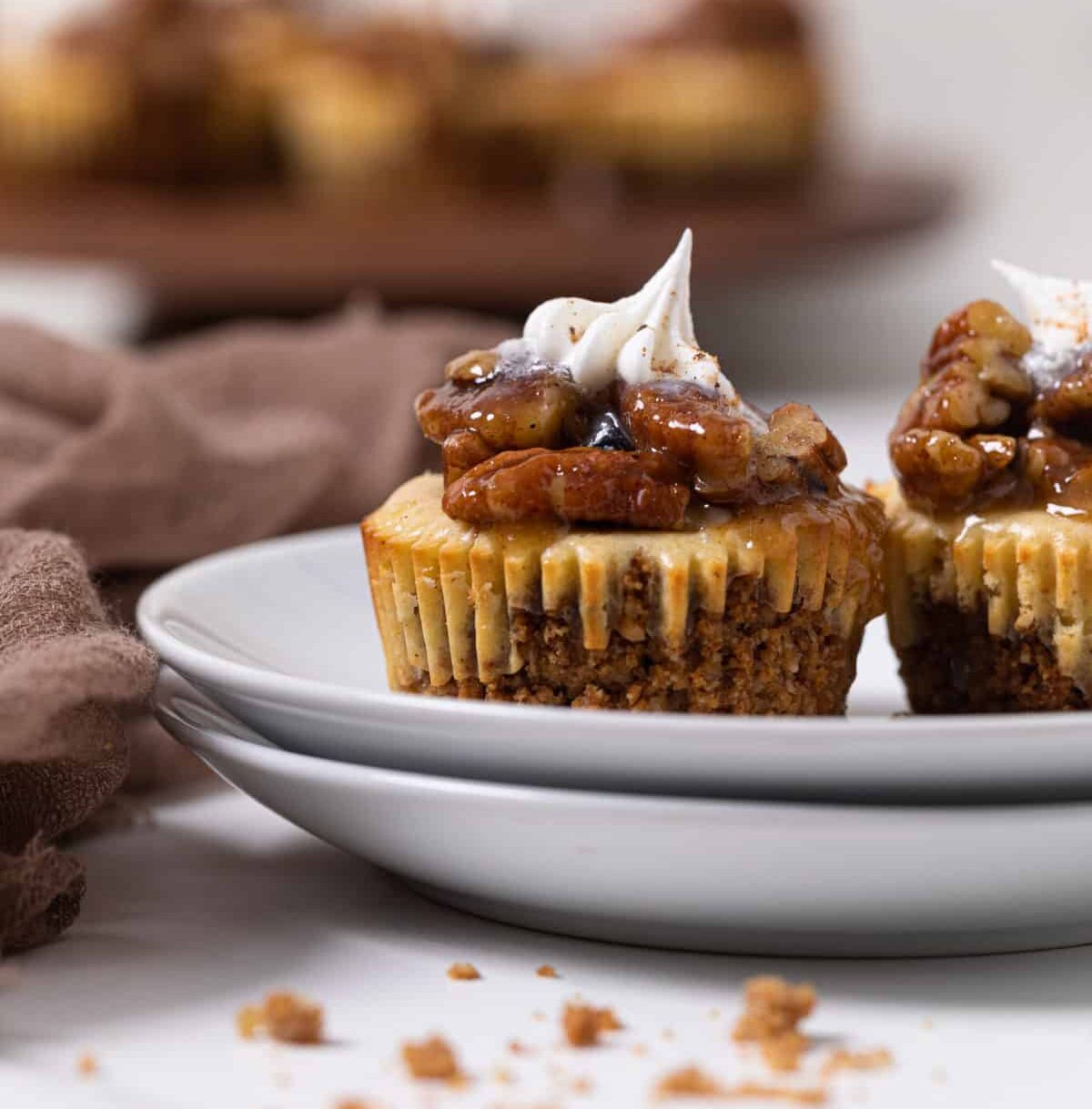 Dessert
These delicious Pecan Pie Cheesecake Bites are an adorable twist on classic Southern pecan pie with a crunchy pecan graham cracker crust and a decadent pecan-caramel glaze on top. This homemade teat is perfect for every occasion, or just snack time!
Jump to Recipe 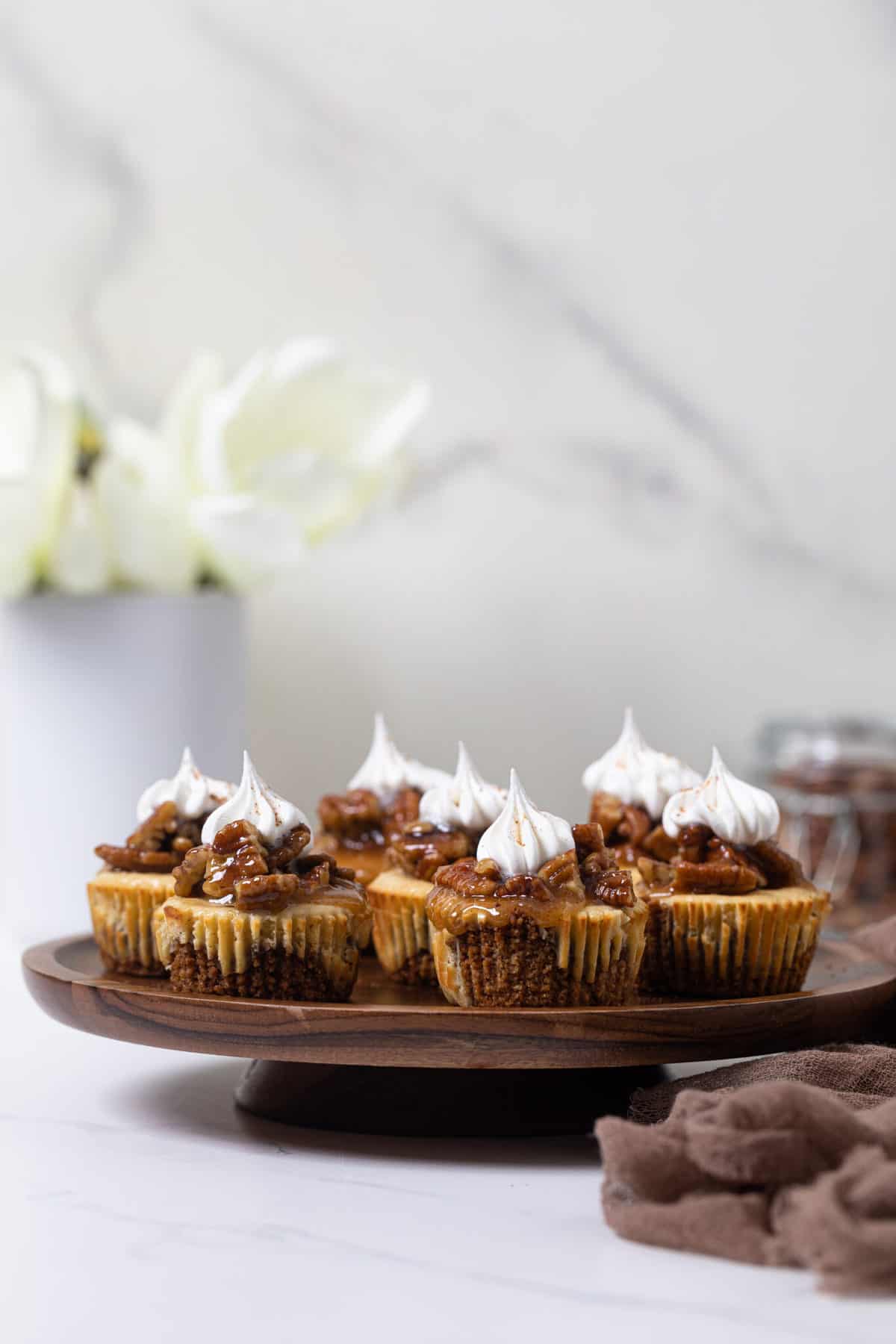 Making these hand-held cheesecake bites with my son always reminds me of growing up in the South, where I loved to try my grandmother's sweet treats. In fact, this recipe for Banana Pudding Cheesecake Cups is inspired by my grandmother's signature dessert. 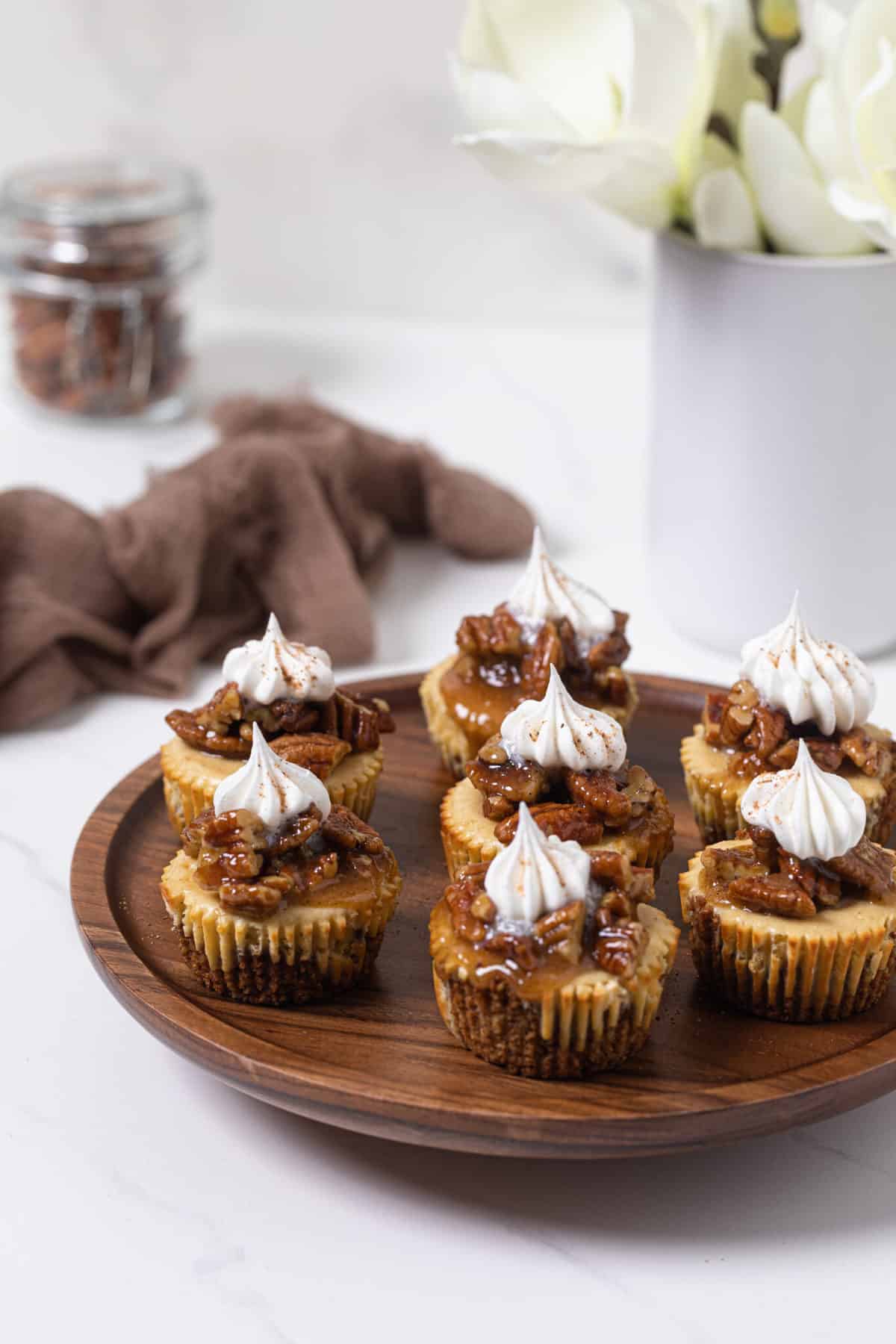 There are three steps in this cheesecake bite recipe: the crust, the cheesecake filling, and the pecan pie topping. Don't worry though, each component is simple to put together and so satisfying!

Once you have your ingredients out and ready, dive right into the easy recipe for these delicious pecan pie mini cheesecakes.

Next, use a food processor to grind the pecans and graham crackers, until almost finely ground. Don't worry if you have few chunks left, they'll add some crunchy texture to your crust.

Combine the pecan-graham cracker mixture with the cinnamon, sugar, and melted butter in a small bowl until well incorporated. This will be your simple four-ingredient cheesecake crust.

Divide the mixture between the cupcake liners (about 2 tablespoons per well). Then gently press the crust down into the bottoms with your fingers to ensure the crust is evenly covering the bottom and sides of the liners.

Finally, bake the crusts for about 5 minutes, until they're set but not browned at all. Remove the crusts from the oven and allow them to cool until you’re ready to use.

While the crusts bake and cool, get to work whipping up your cheesecake filling. I recommend using an electric mixer for this. Beat together the cream cheese, brown sugar, and flour until just combined. Be sure to scrape the sides and bottom of the bowl if needed.

Next, add the vanilla extract and the first egg and beat slowly until mostly combined. Then add the remaining egg and mix until well combined, still mixing everything at low speed. Now, add the sour cream and cinnamon, nutmeg, salt and continue mixing.

If you have one, change mixer attachment to a whisk and beat on medium-high speed for 5 minutes or so. Stop when the mixture is completely smooth and lump-free.

Next, divide the cheesecake filling between the cupcake liners. Use about two tablespoons per liner and use a fork to smooth it flat.

Bake the cheesecakes for 20-25 minutes, then turn off the oven and allow them to sit in the oven for another 5 minutes with the oven door halfway open to avoid cheesecakes from deflating.

**NOTE: When baking, I always prepare a medium pot with water and add it to the oven as well, to keep cheesecake temperature even and to add moisture.**

Finally, remove the cheesecakes from the oven and allow them to continue to cool for another 15-20 minutes, before putting them in the refrigerator for at least an hour.

While your cheesecakes set up in the fridge, you can make the simple and sweet cheesecake topping.

In a medium saucepan over low heat, melt the butter and brown sugar until bubbly, stirring constantly. Next, add the cinnamon, heavy cream, pecans, and sea salt and cook until the nuts are completely coated. Then remove the pot from heat and let the mixture cool at room temperature until it's thickened and gooey, about 10 minutes.
When the topping is cooled and your pecan pie cheesecake bites have set up fully in the fridge, top them with a drizzle of pean pie topping. Then let the sauce set for a few more minutes as both the topping and cheesecakes continue to cool. Then, dig in!

If you choose to make these Delicious Pecan Pie Cheesecake Bites or any other recipe from us, be sure to tag us on Instagram at #Orchidsandsweettea so that we can share the love! 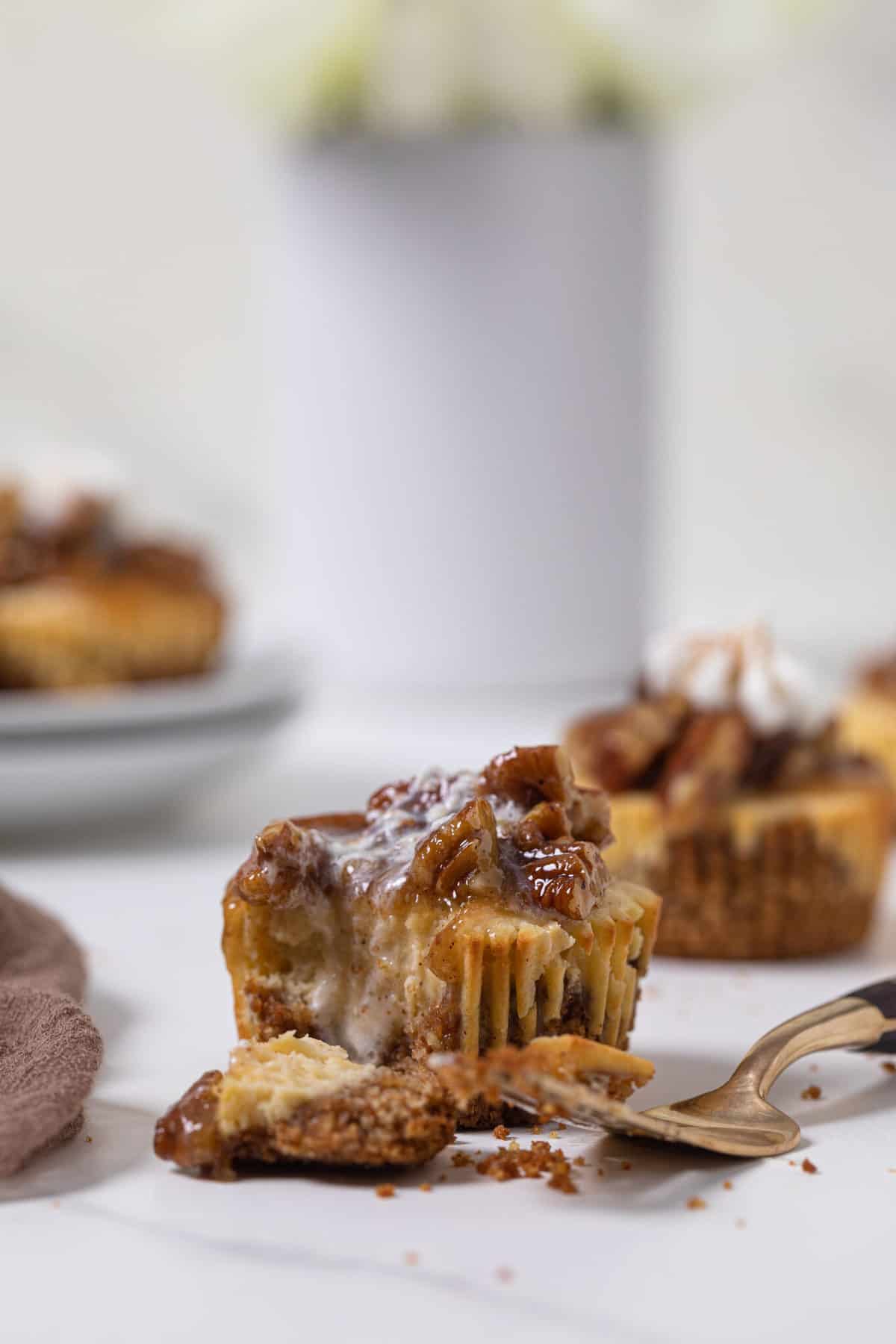 STORAGE: Leftover Cheesecakes can be stored (tightly wrapped) in the refrigerator for up to 5 days. For best results, keep cheesecakes in the freezer until the night before you’re ready to serve. Defrost by refrigerating. TOASTED PECANS: Add chopped pecans to a baking sheet and toasting them in the oven (400 degrees Fahrenheit) for 10-15 minutes, tossing them halfway to ensure that browning is even on both sides. HOMEMADE WHIPPED CREAM: In the bowl of an electric mixer on medium-high speed, whip the organic heavy cream (2 cups), using the whisk attachment for 4-5 minutes, until fluffy peaks begin to form. **NOTE: When it begins to thicken after the first 2-3 minutes, gradually add in 1 tablespoon vanilla extract and a pinch of sea salt.* 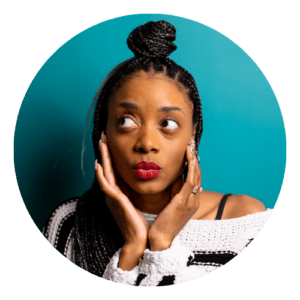