These Overnight Vegan Apple Cinnamon Rolls are loaded with sweet apple flavor and topped with a velvety maple glaze and toasted pecans. Plus this recipe is completely dairy-free and egg-free! 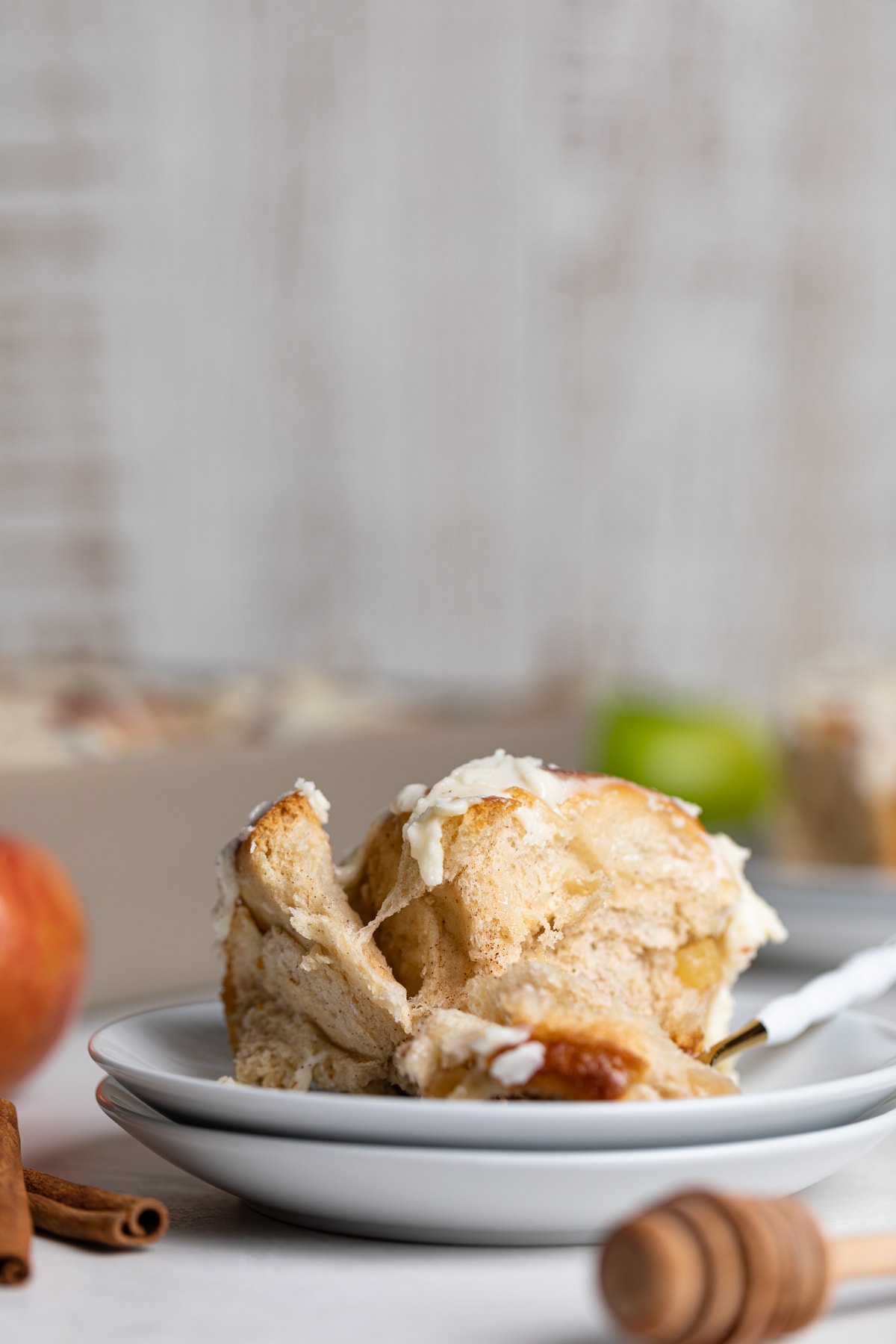 There’s nothing like the first few days of September to put you in the mood for cinnamon apple flavors. Whether it’s a hot bowl of Maple Cinnamon Oatmeal before the first day of school or Vegan Baked Cinnamon Caramel Apples after dinner on a cool fall night, you can’t go wrong with these classic flavors. 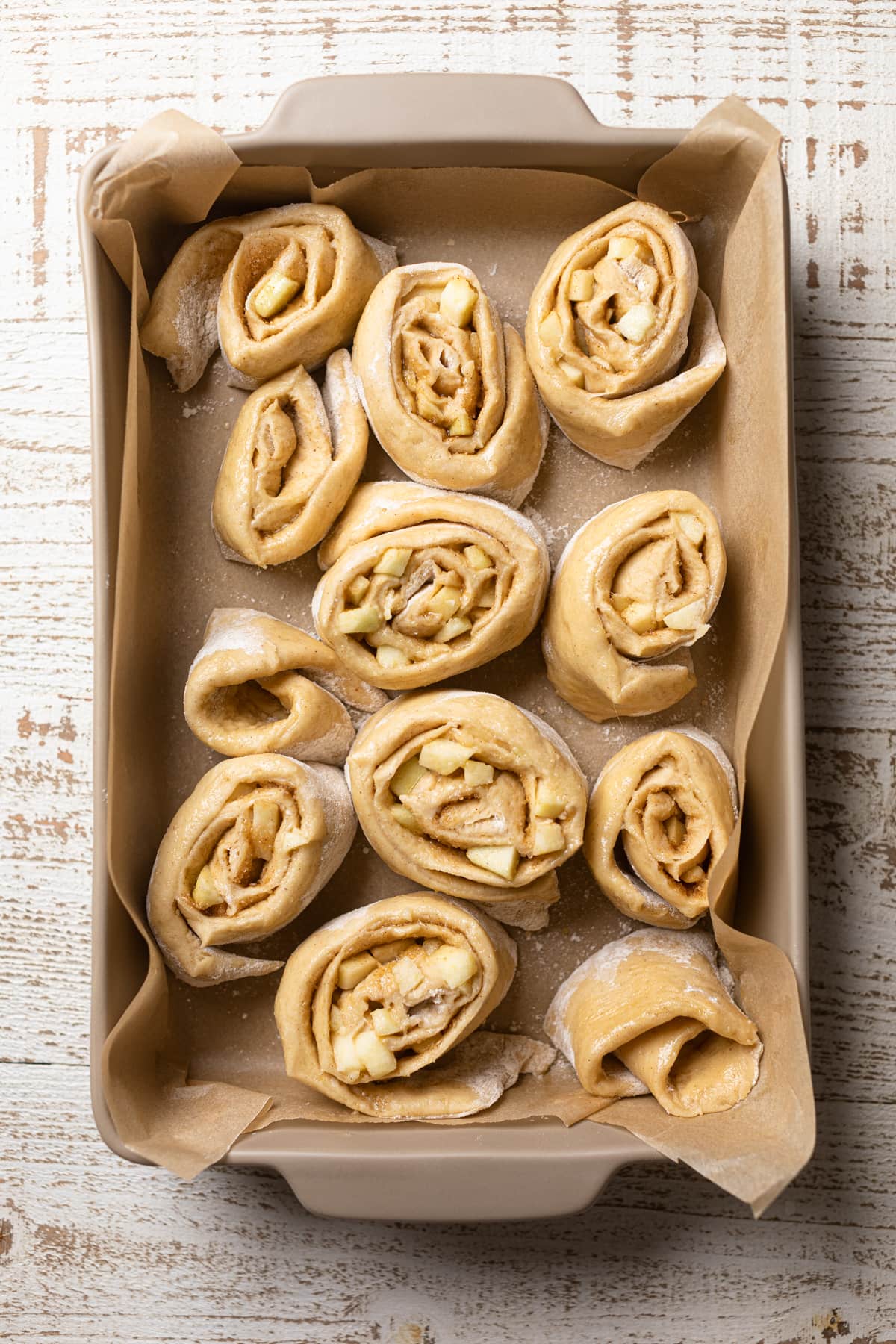 And this cinnamon roll recipe unites them in a totally over-the-top delicious way. It’s hard to believe these fluffy, sweet pastries are dairy-free and egg-free! 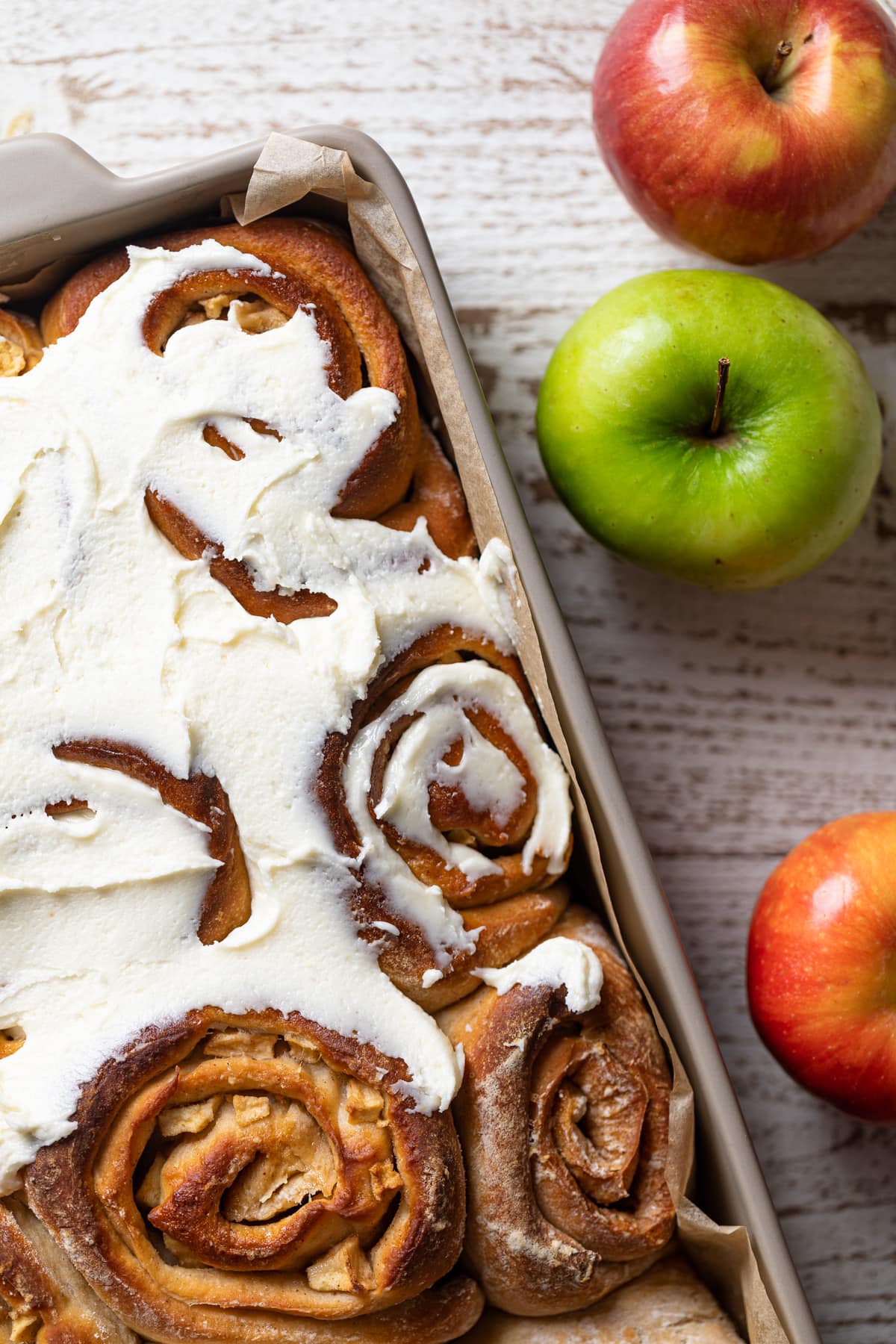 Start by making the cinnamon roll dough. It needs to rise overnight in the fridge. The next day, make the filling and assemble and bake your rolls. Finally, add the maple glaze and dig in! 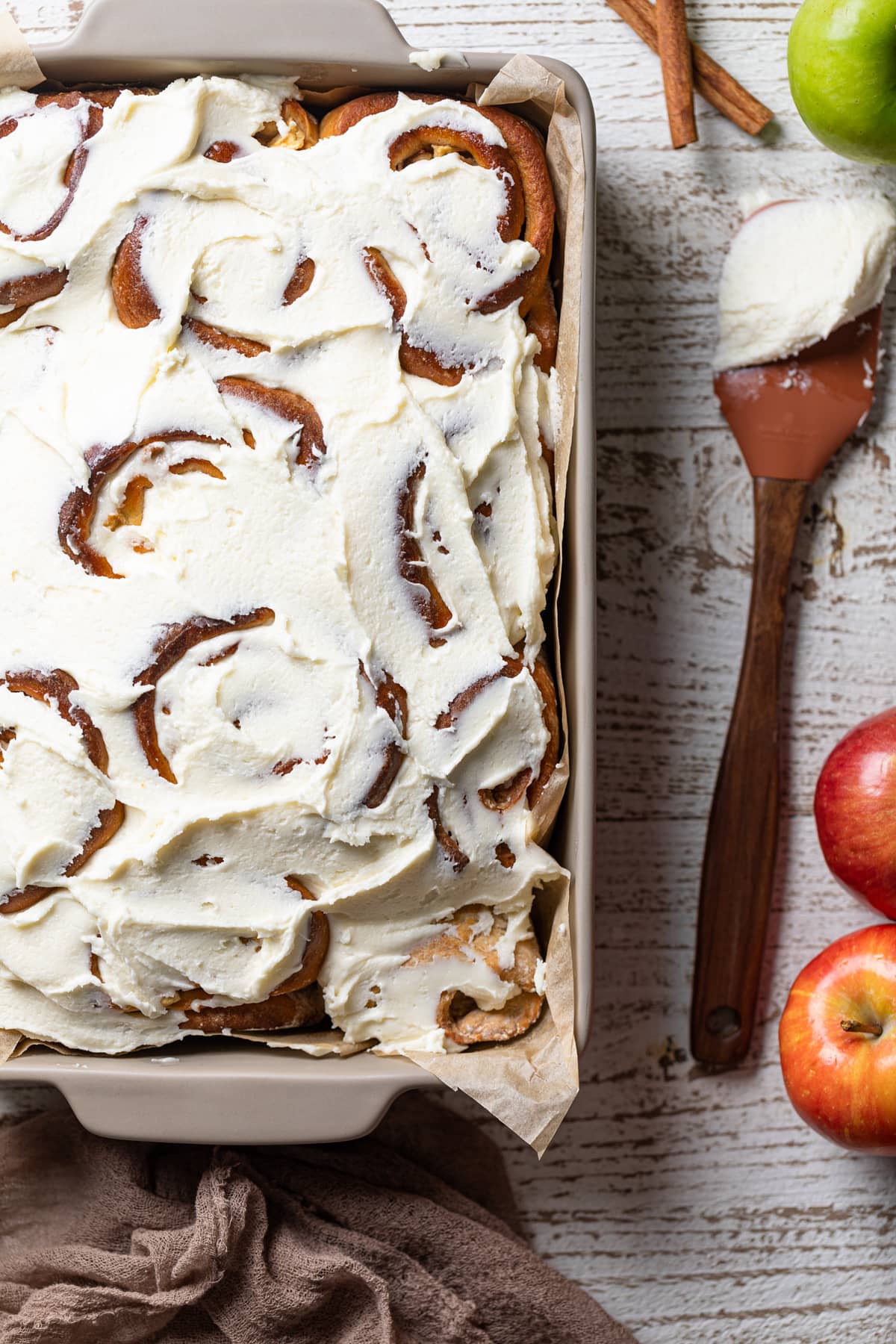 Here’s what you need for the dairy-free and egg-free dough: 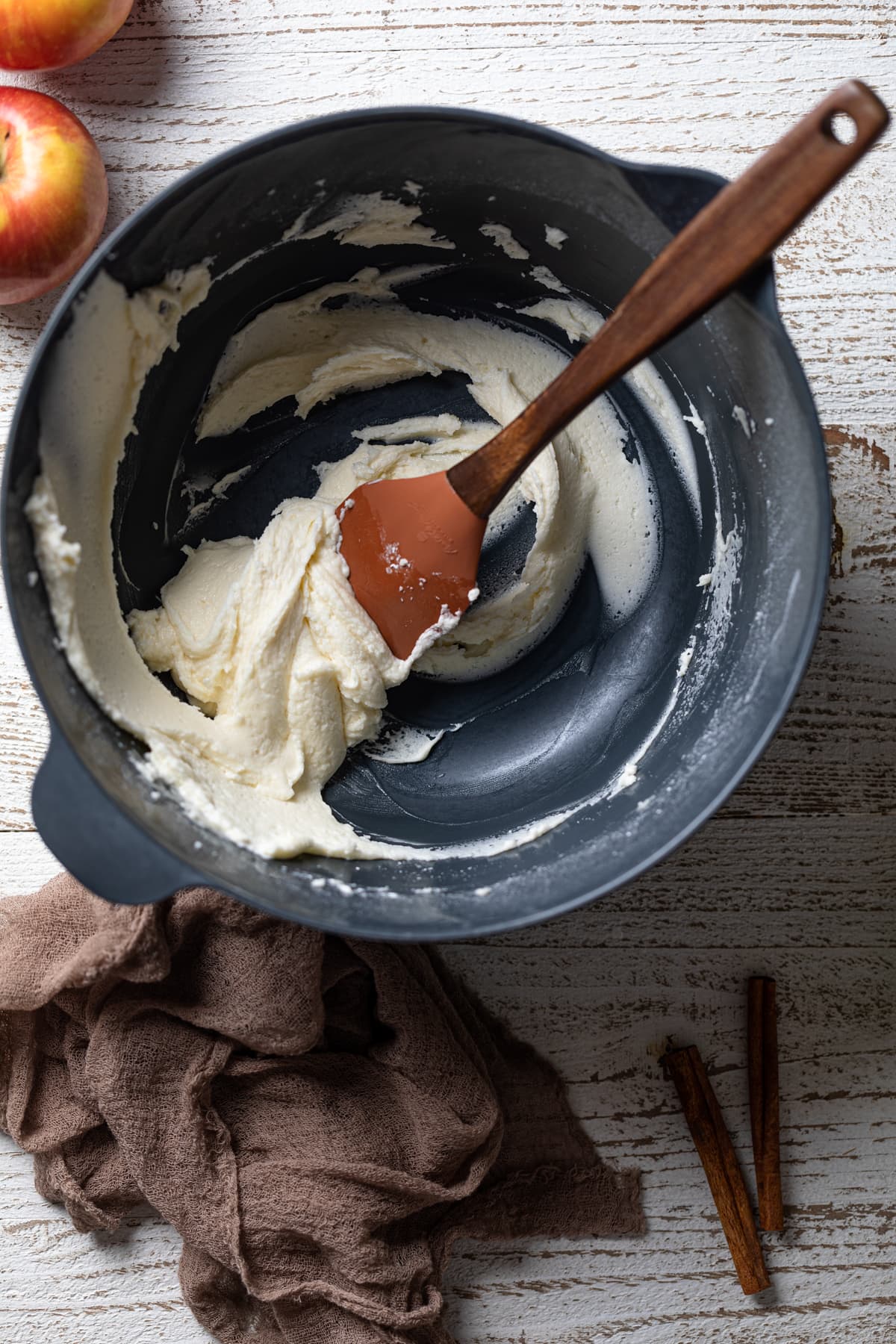 While the dough rises, you can make the delicious cinnamon-apple filling with these three simple ingredients: 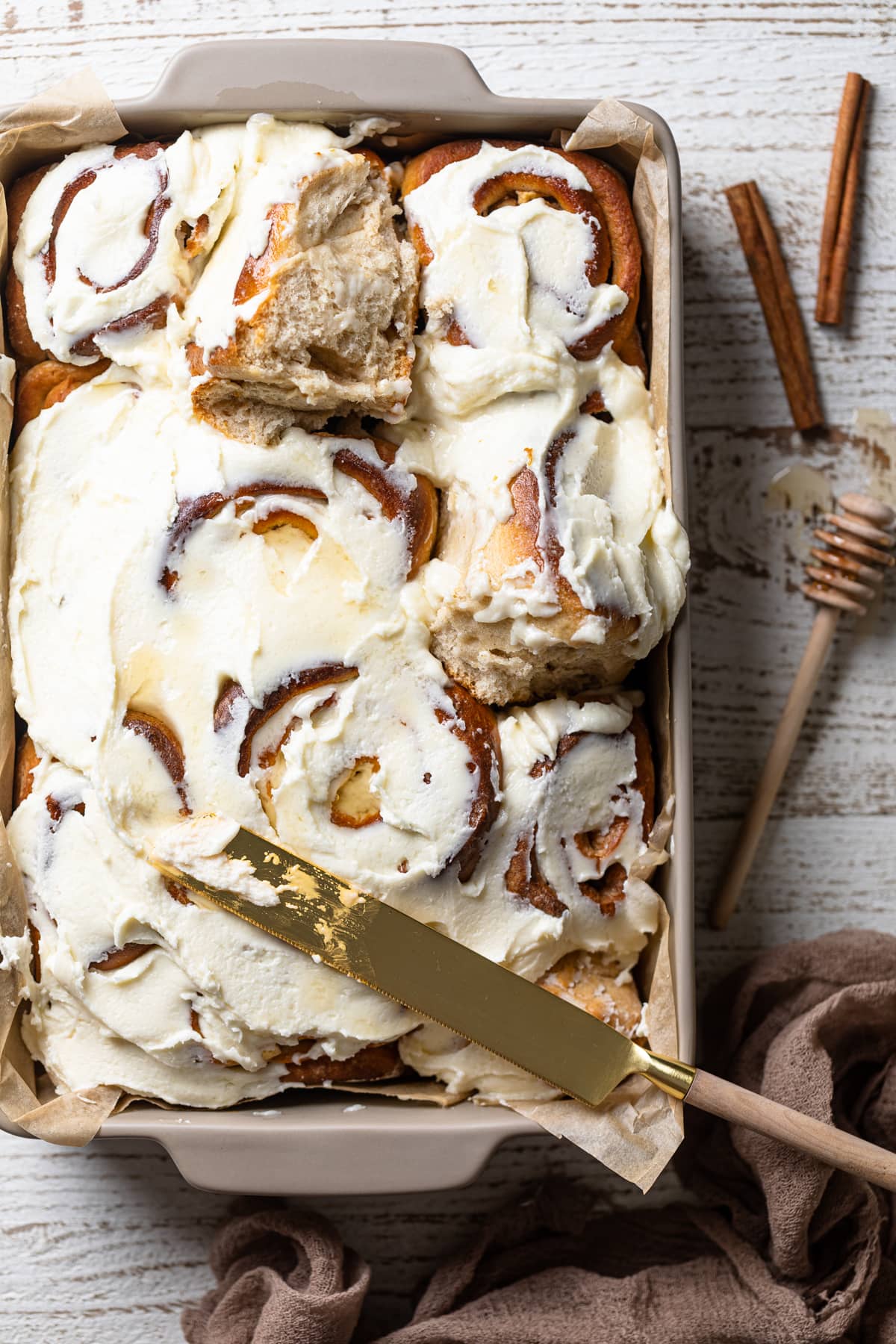 I like to glaze the apple cinnamon rolls with a simple vegan maple icing. Just make sure the rolls are cool before glazing, as it can melt easily.

For crunch on top, sprinkle some toasted pecans!

I’ve made plenty of cinnamon roll recipes before, and these are my top tips to make sure your rolls come out perfectly:

This is the ultimate secret to tender cinnamon rolls. Much like with other cakes and doughs, room temperature butter creates a supple, soft and smooth texture.

Unlike some baking recipes like muffins and cakes, you actually want to mix (or knead) your cinnamon roll dough well. This activates the gluten so the dough becomes extremely elastic. The gluten then creates structure in your dough so it holds its fluffy shape well after rising.

Rising your dough overnight in the refrigerator is the way to get the best flavor and texture. This slow rise allows the yeast to completely ferment the sugar for great flavor and a lot more fluffiness.

One of my latest discoveries was the use of bread flour in my cinnamon rolls. Before, I would use only all-purpose flour. However, after a little experimenting, I’ve learned that bread flour creates a beautiful texture—tender, thick, and even more fluffy, almost ‘brioche’ like. Bread flour has a higher gluten, or protein, content.

Rolling your dough into a tight spiral creates a nice structure. It also allows you to cut the dough more evenly, which helps things bake evenly. When rolling, always start the initial first roll really tight to keep the same momentum throughout. 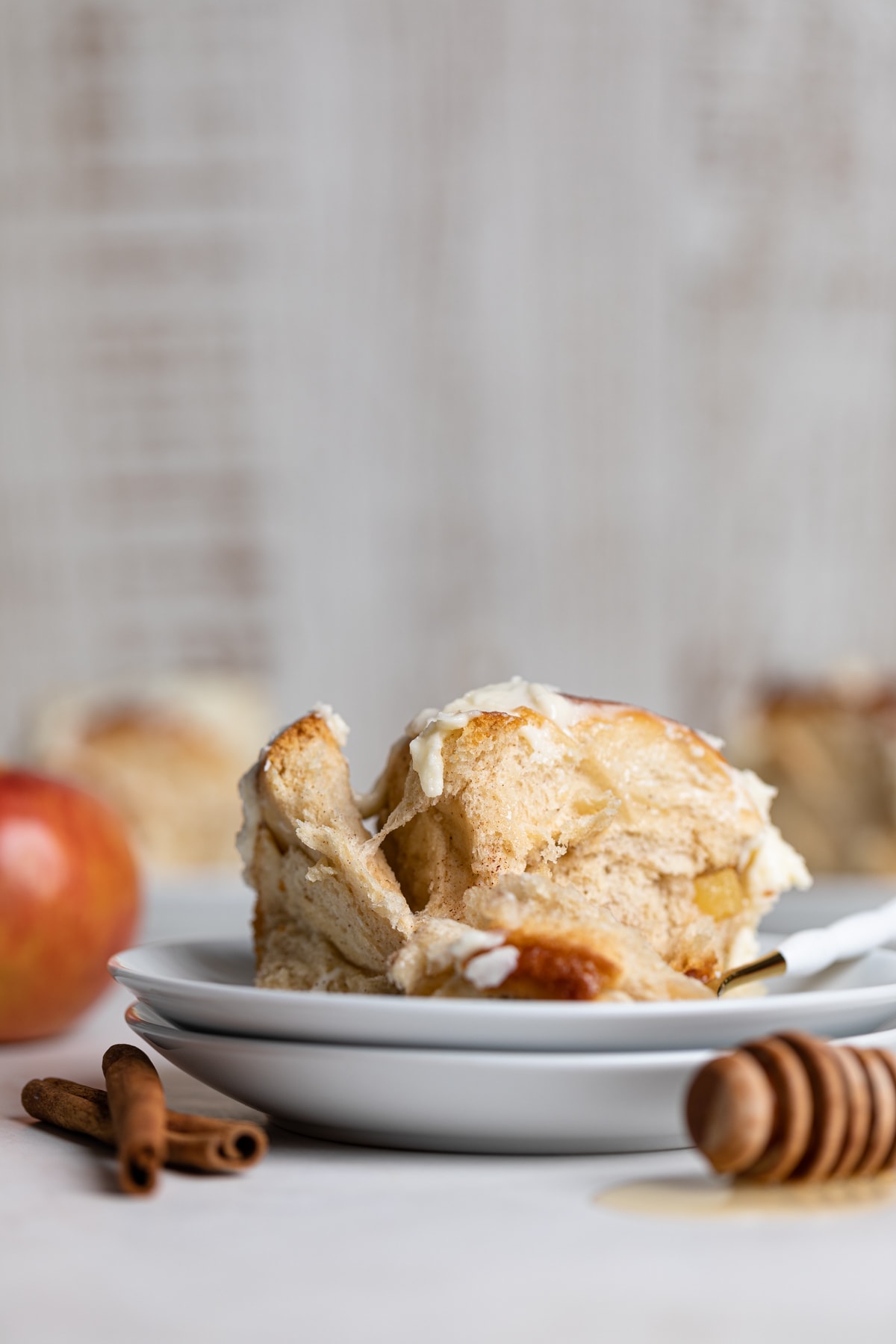 If you make these Overnight Vegan Apple Cinnamon Rolls or any other recipe from us, be sure to tag us on Instagram at #Orchidsandsweettea so that we can share the love! 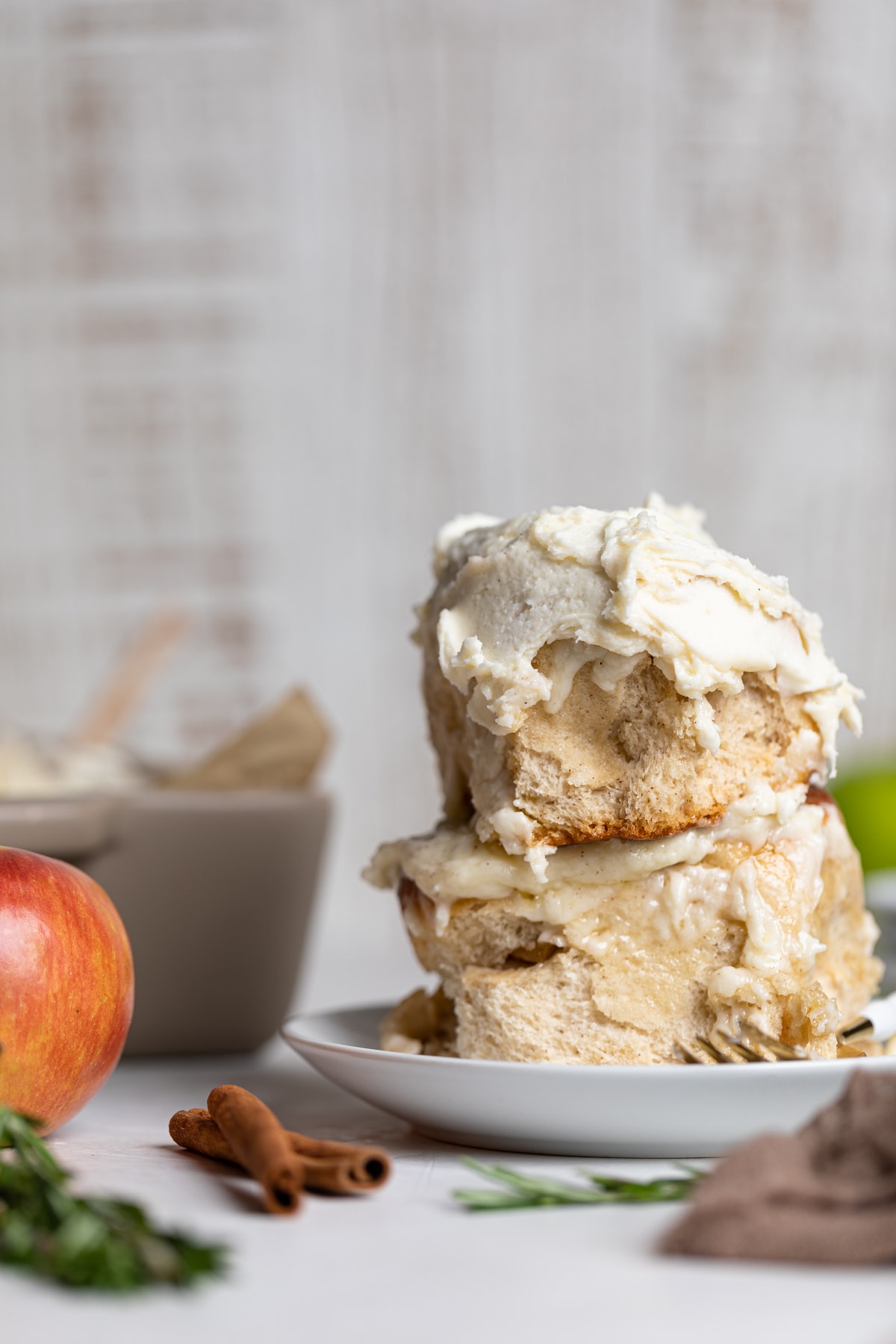 FOR THE APPLE FILLING: