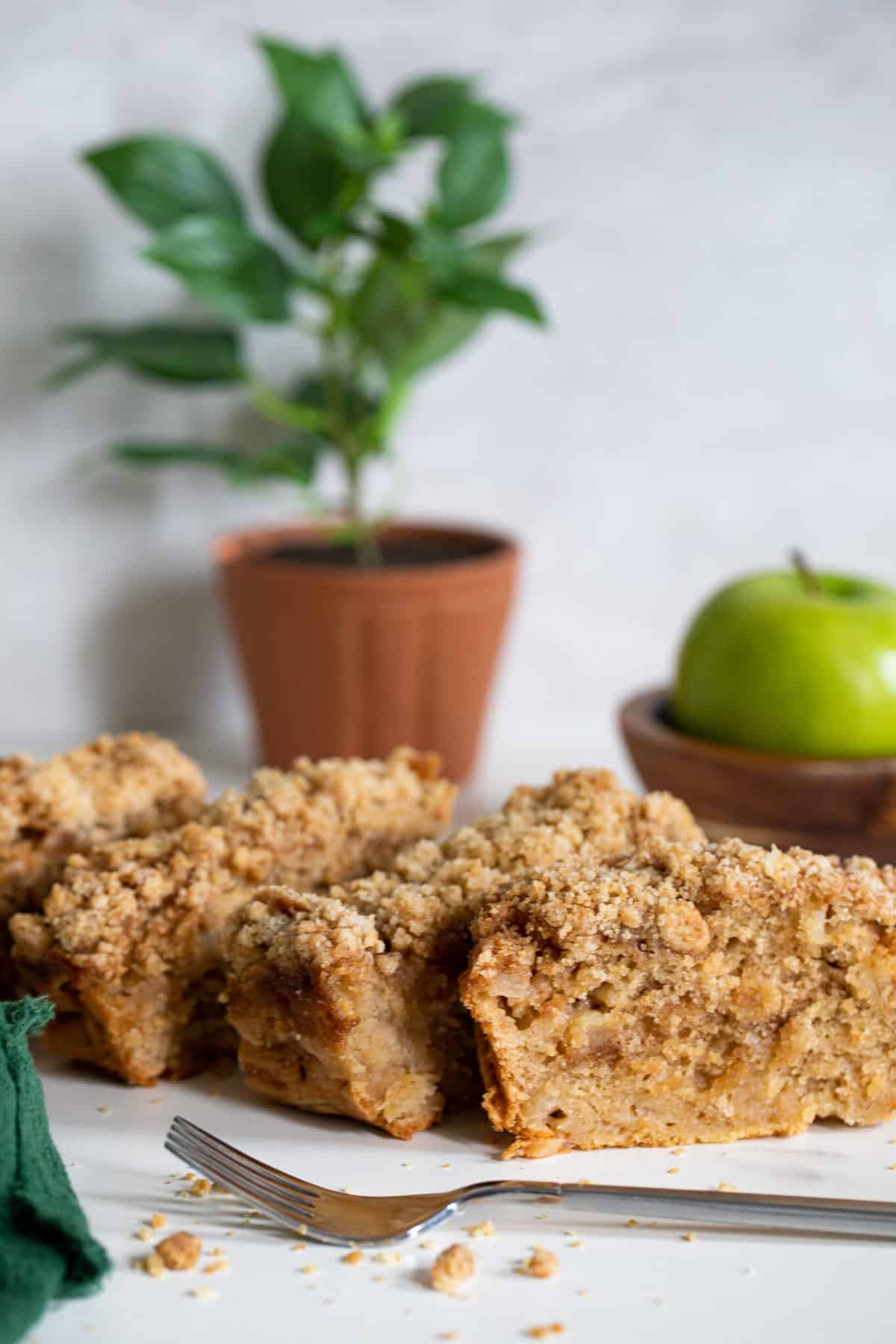 This Vegan Apple Cinnamon Crumble Bread is peak fall. It has warming spices and a soft, moist center with a bit of crunchy streusel on top. 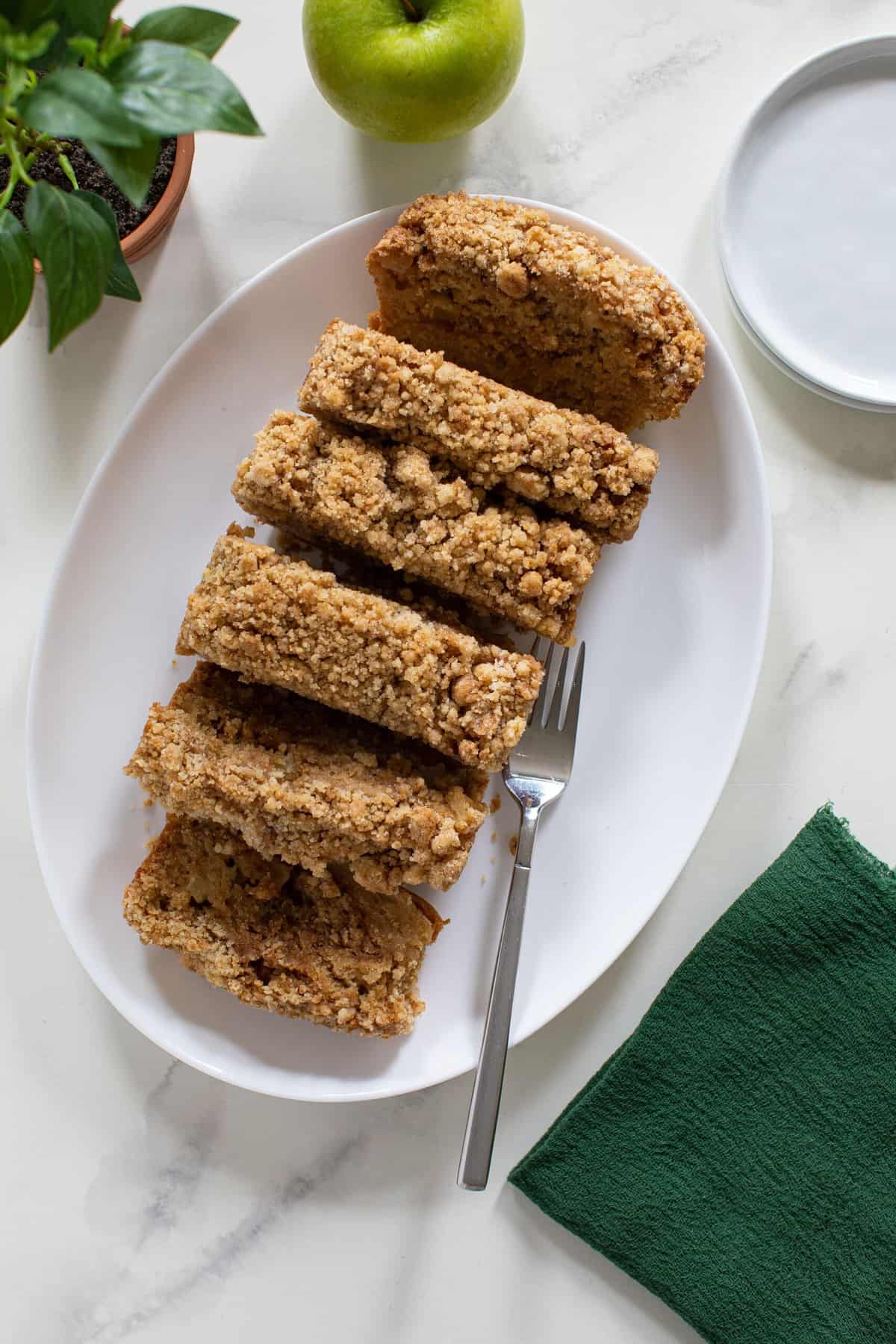 This is a quick and easy recipe. The hands-on time is only 10 minutes. You’ll start by making a quick apple puree. This adds tons of moisture and natural sweetness to the bread. Then finish the bread dough, and finally make the quick nutty crumble topping.

Making the perfect crumble just means ensuring that the butter-to-dry ingredient ratio is JUST RIGHT. That means crumbly instead of super wet or super dry.

You literally want to feel the crumble in your hand without needing to rush over to the sink to rinse it off because it’s so wet.

I also love grinding up my nuts a bit so that they make for the perfect bite and less weight on top of the bread. 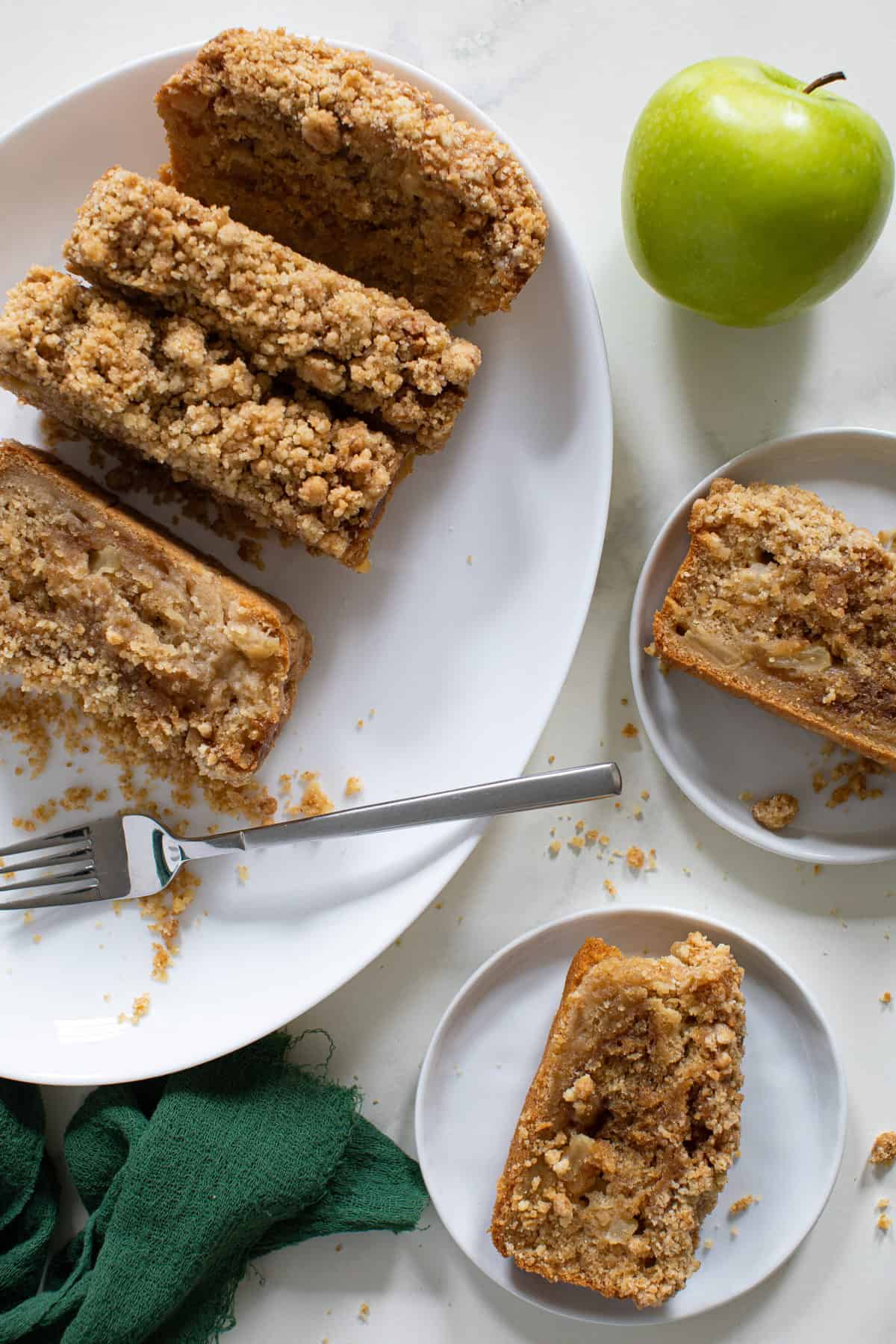 Here’s what you need for this quick apple cinnamon bread: 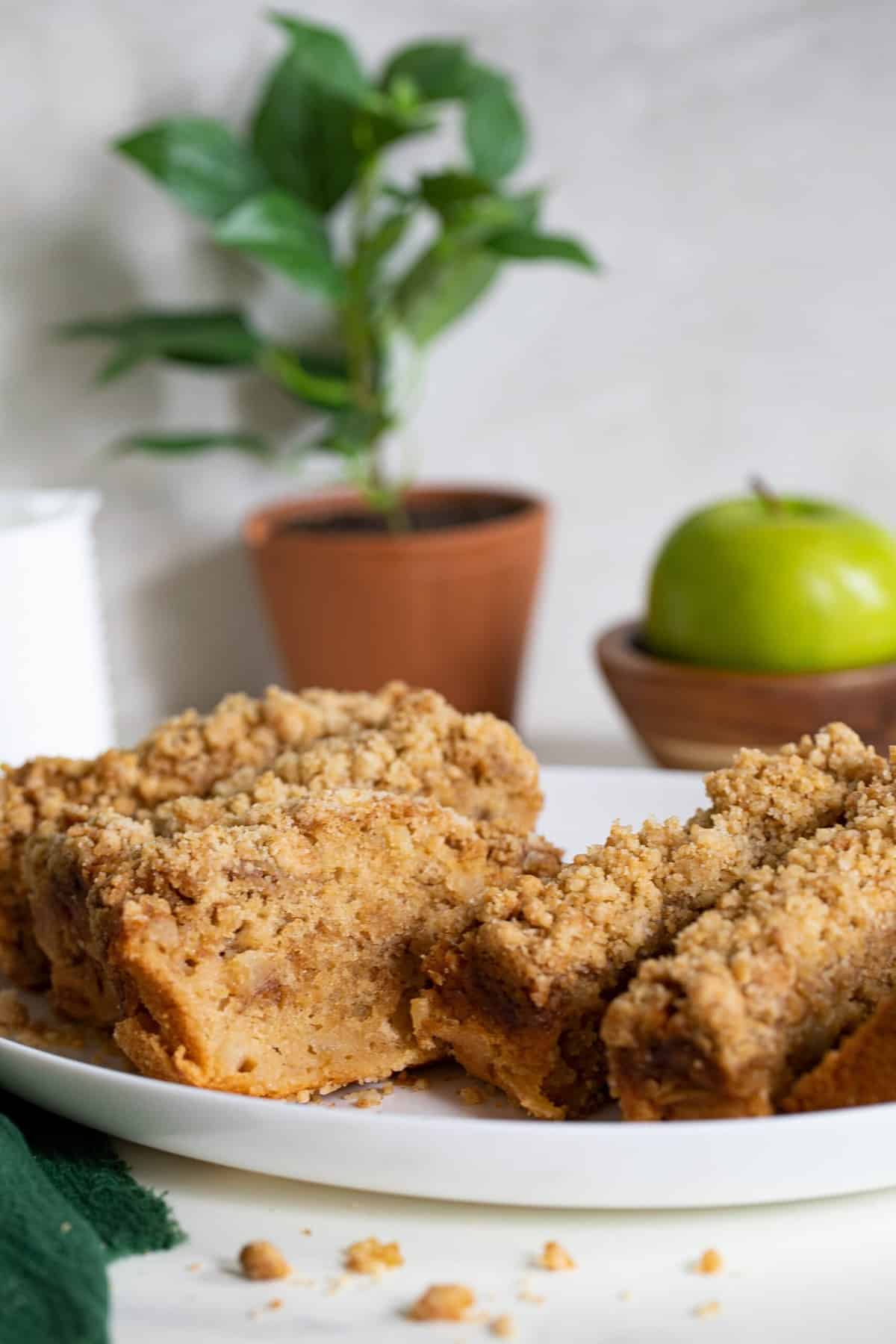 What Kind of Apple is Best for Quick Bread?

Honestly, because I choose to puree my apples for this as well as add little chunks inside, I love using apples that hold up together well once cooked. These apples usually include: Granny Smith, Gala, Honey crisp, Fuji, etc. However, if you are tight on time and don’t have time to make a puree out of your apples, you can always substitute the apples with applesauce and just add chopped apples in for the chunks.

How Do You Store Leftover Bread?

Refrigerate leftover bread to keep it fresh. First wrap it tightly it in foil or keep it fully covered in a cake stand. It will last for up to a week.

You can also keep the bread at room temperature for up to 2 days.  Or freeze the apple crumble bread for up to 3 months. Just ensure that your bread cools completely before placing it in the refrigerator or freezer (stored in a freezer-safe Ziploc).

How to Ensure that Your Bread Bakes Through.

One of the major complaints from readers is that their bread sometimes cooks faster on the outside than inside. To combat this, poke small holes over the top of the bread before baking. This allows heat to pass through the crumble into the batter.

You can simply do this with a toothpick. Poke holes again halfway through baking.  You’ll get a fully cooked loaf of apple cinnamon bread.

Storage for this Apple Cinnamon Bread

Refrigerate leftover Apple cinnamon bread by tightly wrapping it in foil paper or keeping it fully covered in a cake stand—lasts up to a week. Can also be stored at room temperature for up to 2 days. 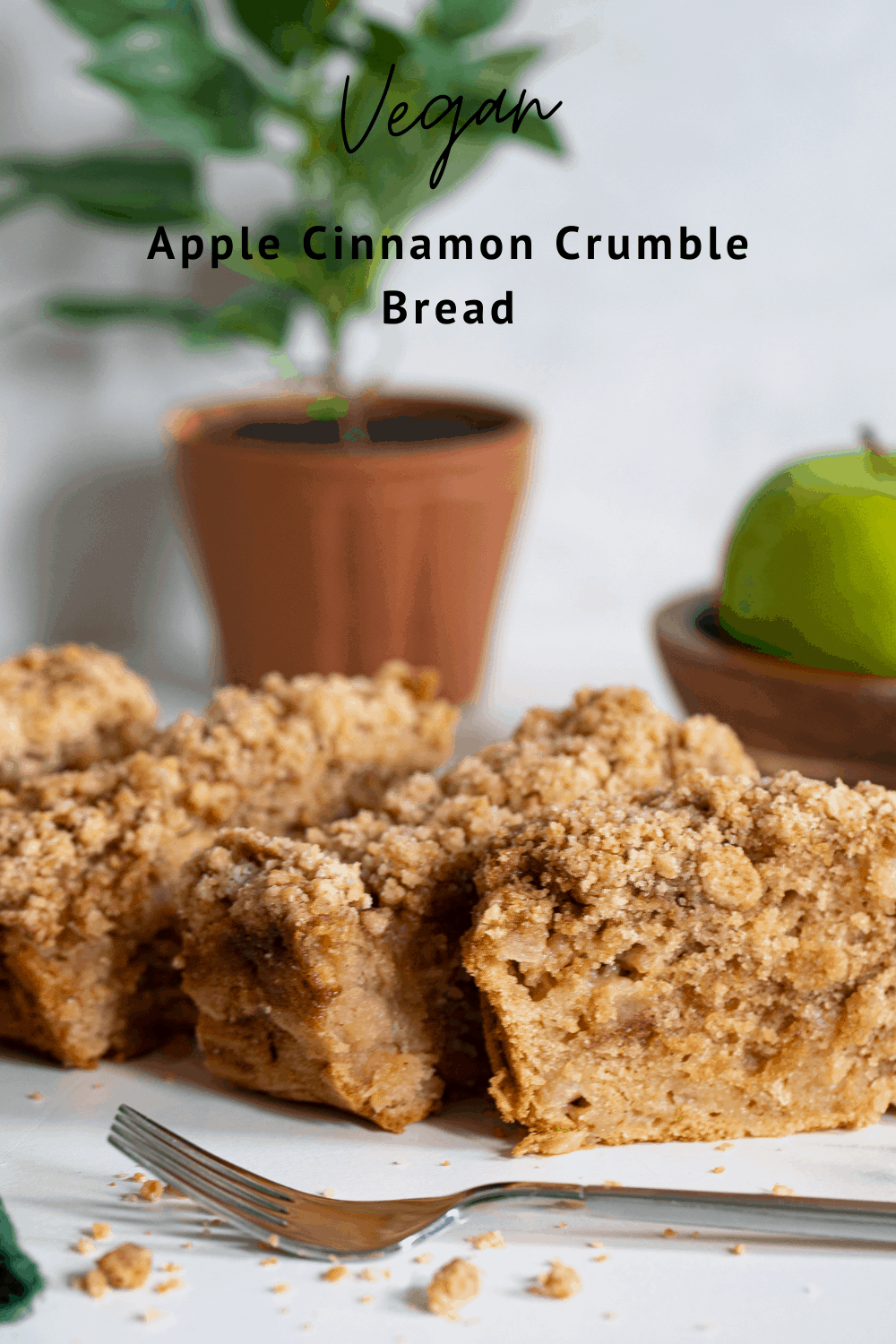 If you make this Vegan Apple Cinnamon Crumble Bread, tag @orchidsnsweettea_ on Instagram and hashtag it #orchidsandsweettea!