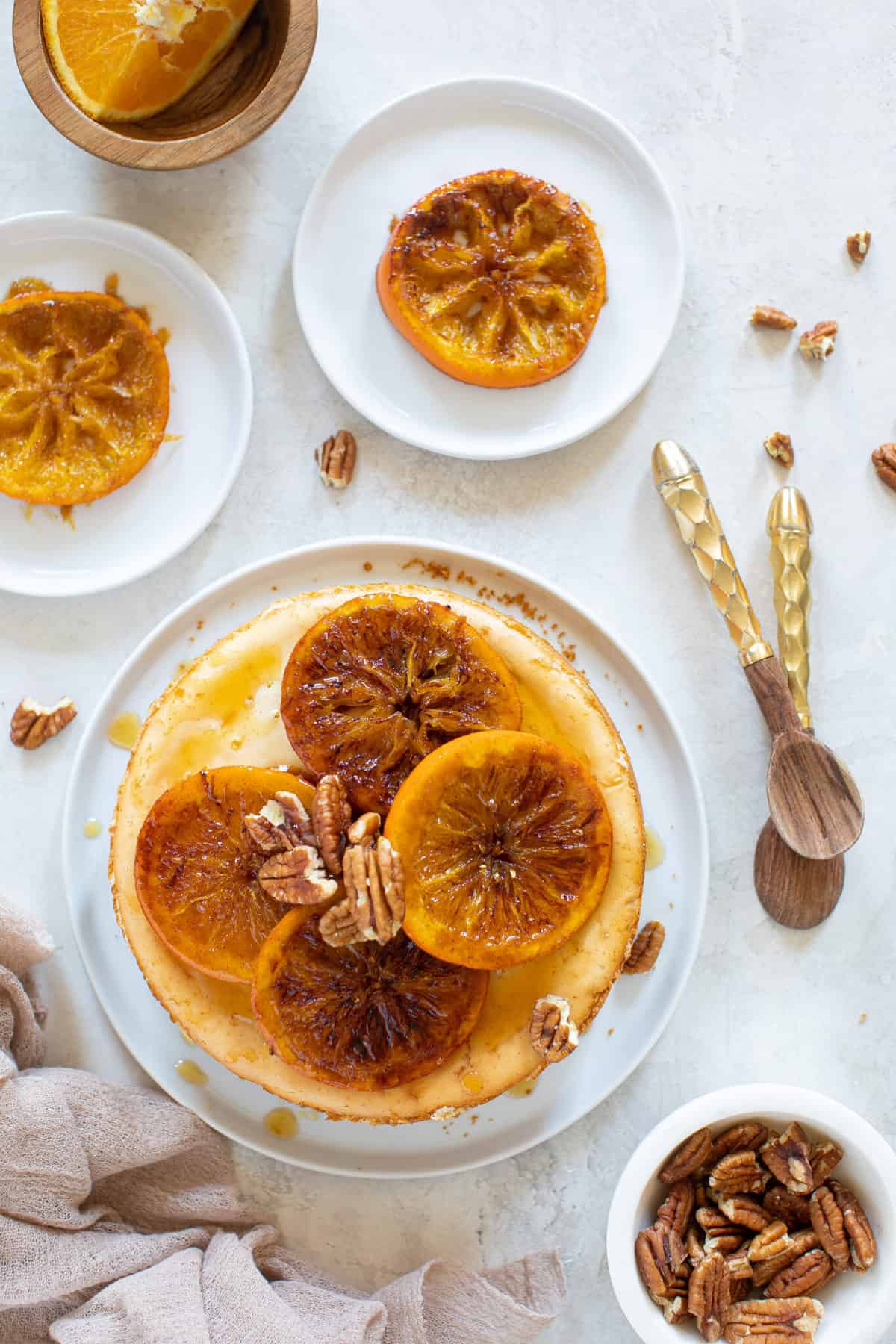 Spiced Orange Cheesecake with Pecan Crust is the perfect Fall-inspired dessert with every bite.  This cheesecake comes completely based with a thick, tasty Pecan + Graham Cracker crust, followed by a velvety orange-infused cheesecake filling and a scrumptious caramelized spiced orange spice topping. You can’t have a family gathering or special occasion during this season without this dessert recipe.

Spiced Orange Cheesecake with Pecan Crust. If you know me then you know that I absolutely LOVE cheesecake! I mean I’m so obsessed!

Cheesecake was actually one of the first desserts I ever mastered. Crazy, right? I know. Interestingly enough, it became easier and easier to master with time, although I often used a store-bought crust and canned toppings. Haha. Don’t judge!

I don’t know about you, but oranges have been such an under-utilized ingredient for me. Granted, I tend to use oranges in a smoothie, as juice, or something of that realm. However, I haven’t experimented much with this flavor UNTIL NOW.

So far this week, I shared these Crispy Baked Sticky Orange Cauliflower Bites with you guys and you love them as much as I do! Yay!

And if you’re looking for something savory—-this Baked Fall Harvest Black Bean Sweet Potato Burgers + Spicy Mayo recipe would be just perfect for your taste buds! 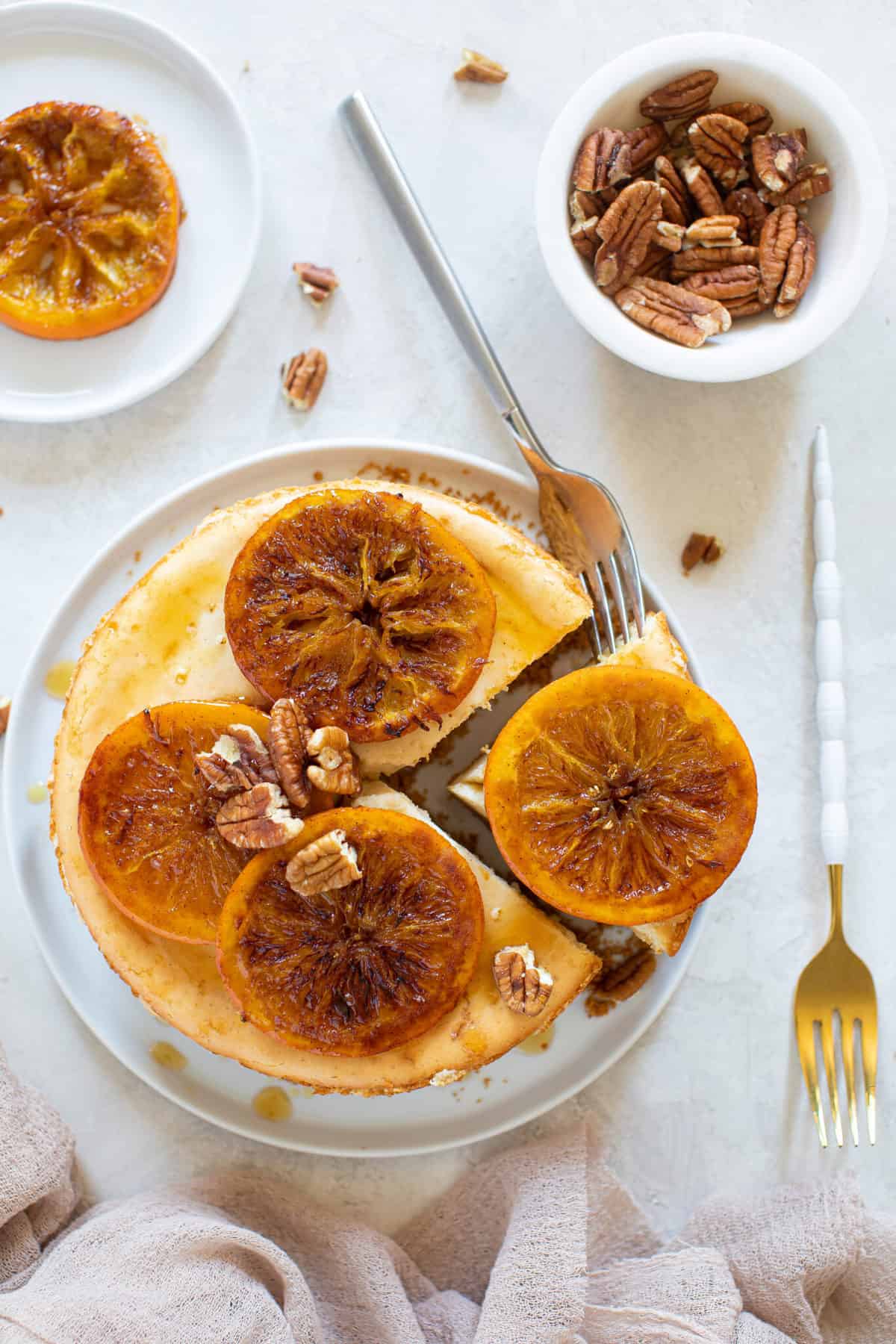 Now that I enjoy making my cheesecakes from scratch, I must say that every bite means something!

Not only does it mean that it’s so much more delicious, BUT it means that you truly are able to evolve into something that you never thought you could, once you keep trying and cultivating your skills.

If you’ve been an avid reader of Orchids + Sweet Tea, then you’re probably already aware of how this love even begun.

Mini Backstory to My Love For Cheesecake.

Moving to NYC at the age of 13 was such a huge transition (in more ways than one), but more importantly, the food was a major transition.

Fast forward to a year or two later, when I first introduced to my first real slice of Cheesecake and never putting down a fork whenever I see one close enough to grab a bite. Haha. Yup. My obsession is that real!

Don’t believe me? Scroll down for a few delicious cheesecake recipes! 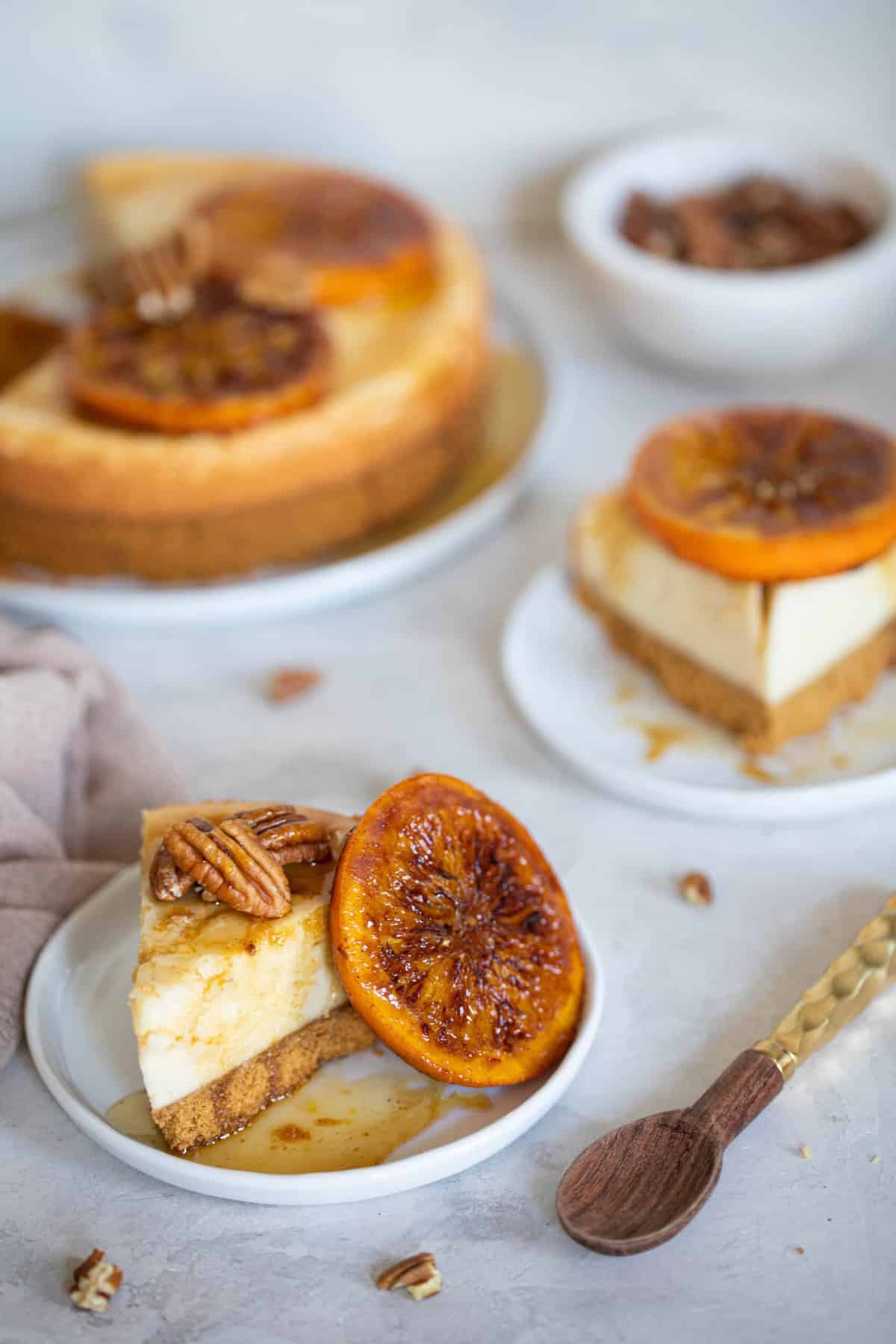 Love Cheesecake? These Recipes are THE BEST!

These Delicious Pecan Pie Cheesecake Bites are one of my faves! They are an awesome rendition of traditional Southern pecan pie except for the velvety texture of cheesecake.

Oh and then there are these Southerner’s Banana Pudding Cheesecake Bites, which of course pays a great homage to the ultimate dessert that I grew up eating ALL the time—- Banana pudding!

This Caramel Apple Spice Cheesecake is the perfect Fall-inspired dessert with every bite. This cheesecake comes completely based with a thick tasty Pecans + Graham Cracker crust, a velvety delicious caramel cheesecake filling and a scrumptious caramelized apple spice glaze on top.
The Best Oreo Cheesecake Bites are what we call these little bites and it’s no understatement. Not only are these little bites the perfect size, but they come fully packed with a beautifully tasty oreo cookie crust and a decadent oreo filling, topped with whipped cream and a full oreo cookie for extra goodness.

These Pumpkin Cheesecake Bites + Pecan Crust are the ultimate dessert recipe. Not only are these little bites the perfect size, but they come fully packed with a beautifully tasty Pecans + Graham Cracker crust, velvety pumpkin + spice flavored filling, and topped with light whipped cream + toasted pecans. Perfect for any day, family gathering, special occasion, or season. 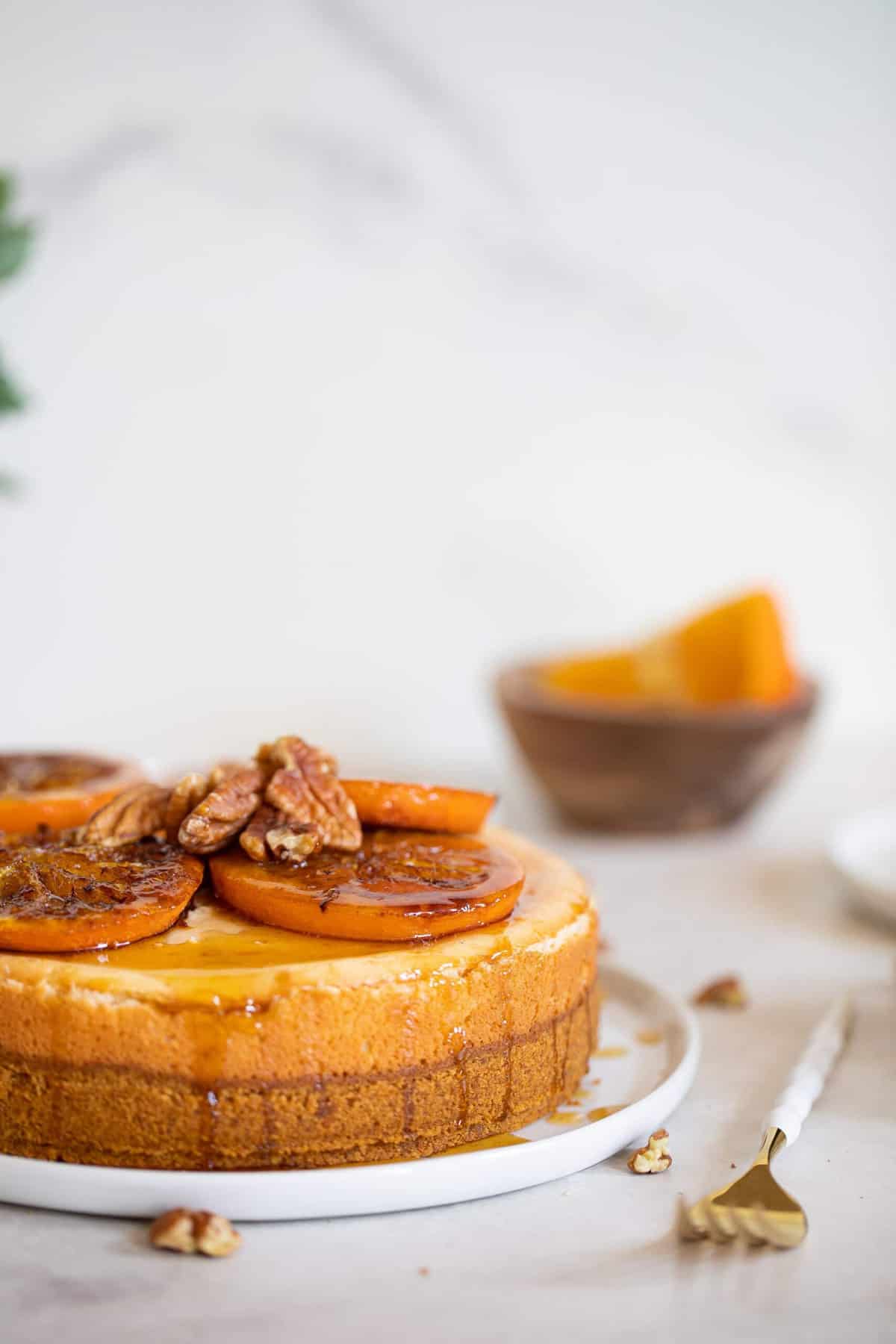 What You’ll Love Most About this Cheesecake.

Done in under 1 hour.

Only requires ONE baking dish—a Cheesecake Baking Pan allows for an easy slip out!

The epitome of DELICIOUS.

Those caramelized oranges are EVERYTHING!

Did I mention that it’s just TOO GOOD TO PASS UP!? 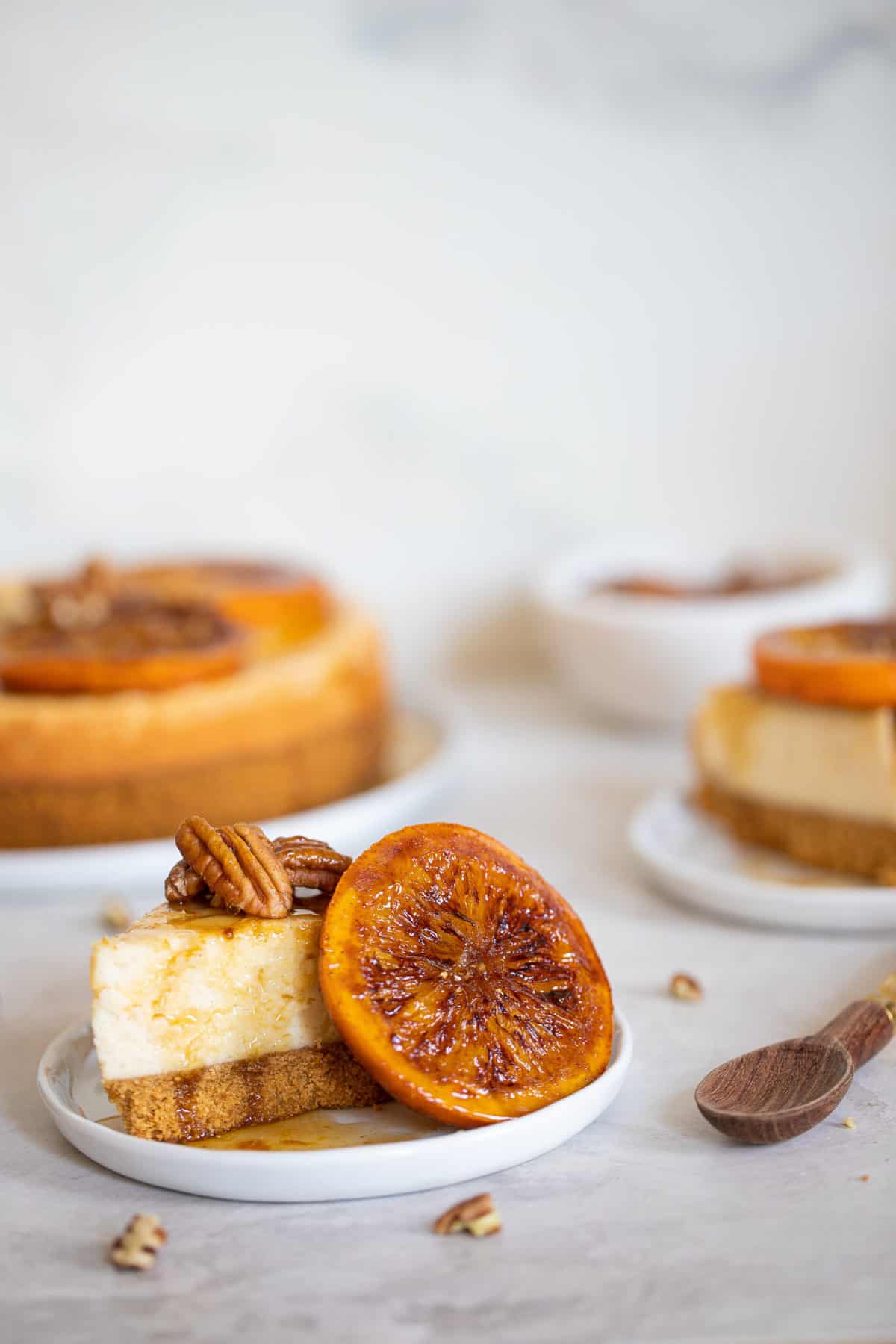 Always, ALWAYS soften your cream cheese at room temperature for a minimum of 30 minutes to ensure that it can be fully smooth when you beat it in an electric mixer.

Be sure to add in the eggs ONE AT A TIME and always keep the mixer’s speed on low to avoid over-mixing. A light mix always does the trick!

Use the Right Pan.

I find that using the correct baking pan helps to make a great cheesecake as well. I like using the traditional cheesecake pans that pop out at the bottom for whole cheesecakes. When making cheesecake bites, I prefer lining the pan with cupcake liners for ease.

I like to add a small pot of water on the lower rack of the oven while I bake my cheesecakes, cakes, cupcakes, etc. However, you can always add your cheesecake pan within another pan that has a small amount of water as your bath. Either way, it keeps in the proper moisture and helps everything to bake nicely.

Keep the Opening of the Oven Door at a Minimum.

Do the Wobble, Wobble Test!

When checking to see if your cheesecake is done, always do the jiggle test to ensure that it only jiggles slightly in the middle. Don’t worry—while it cools, the trapped heat will continue to cook the center nicely.

Lastly, be sure that your cheesecake is FULLY cooled before covered. This avoids condensation form forming and that not so great wetness that happens on the tops when covered before cooled.

Once fully cooled at room temperature, you’re free to refrigerate it for an hour (uncovered) and then you can place foil or plastic wrap over it after that. 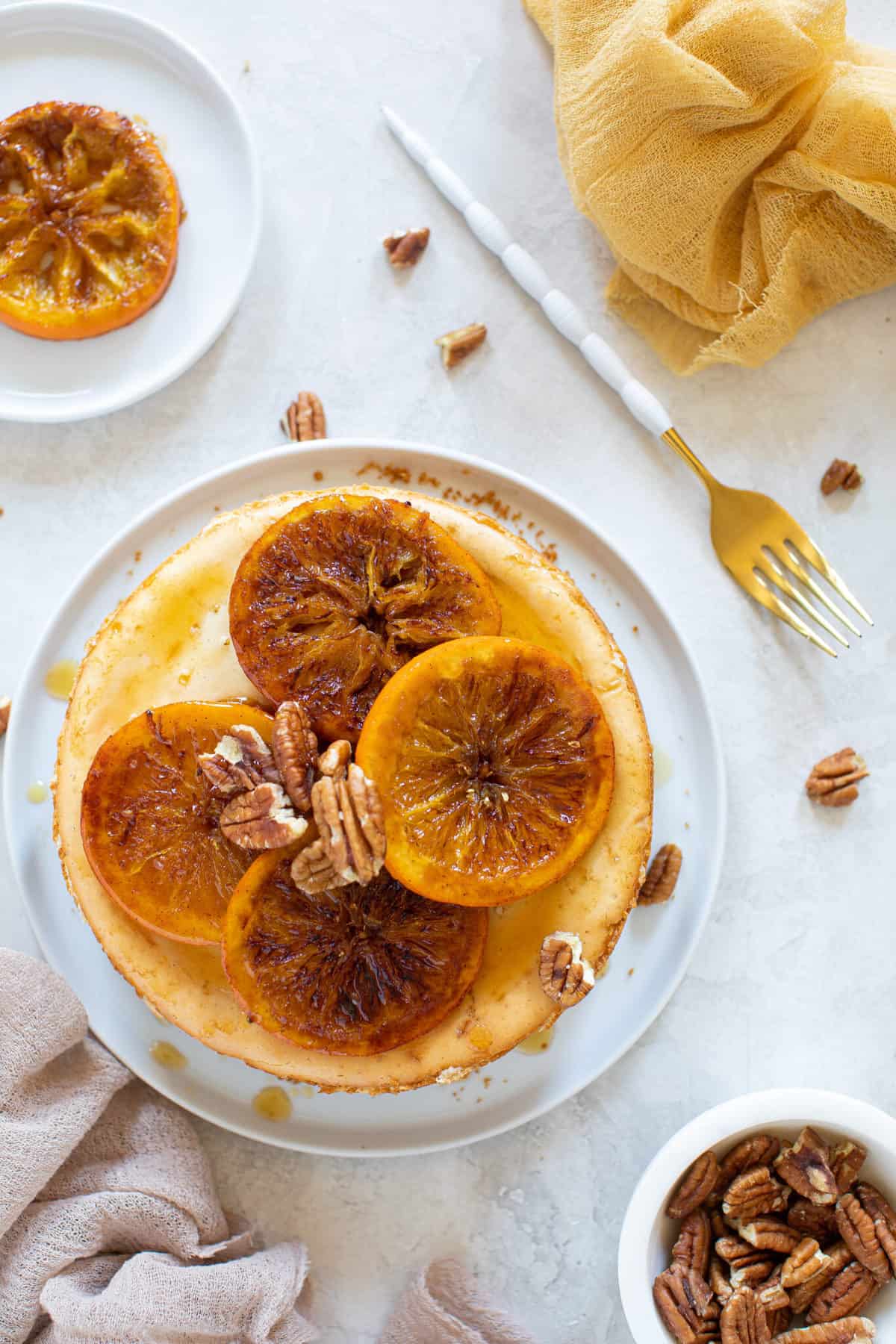 5 from 1 vote
Spiced Orange Cheesecake with Pecan Crust is the perfect Fall-inspired dessert with every bite.  This cheesecake comes completely based with a thick, tasty Pecan + Graham Cracker crust, followed by a velvety orange-infused cheesecake filling and a scrumptious caramelized spiced orange spice topping. You can't have a family gathering or special occasion during this season without this dessert recipe.
Prep Time: 15 mins
Cook Time: 40 mins
Total Time: 55 mins
Serves: 8 servings
Print It Pin It 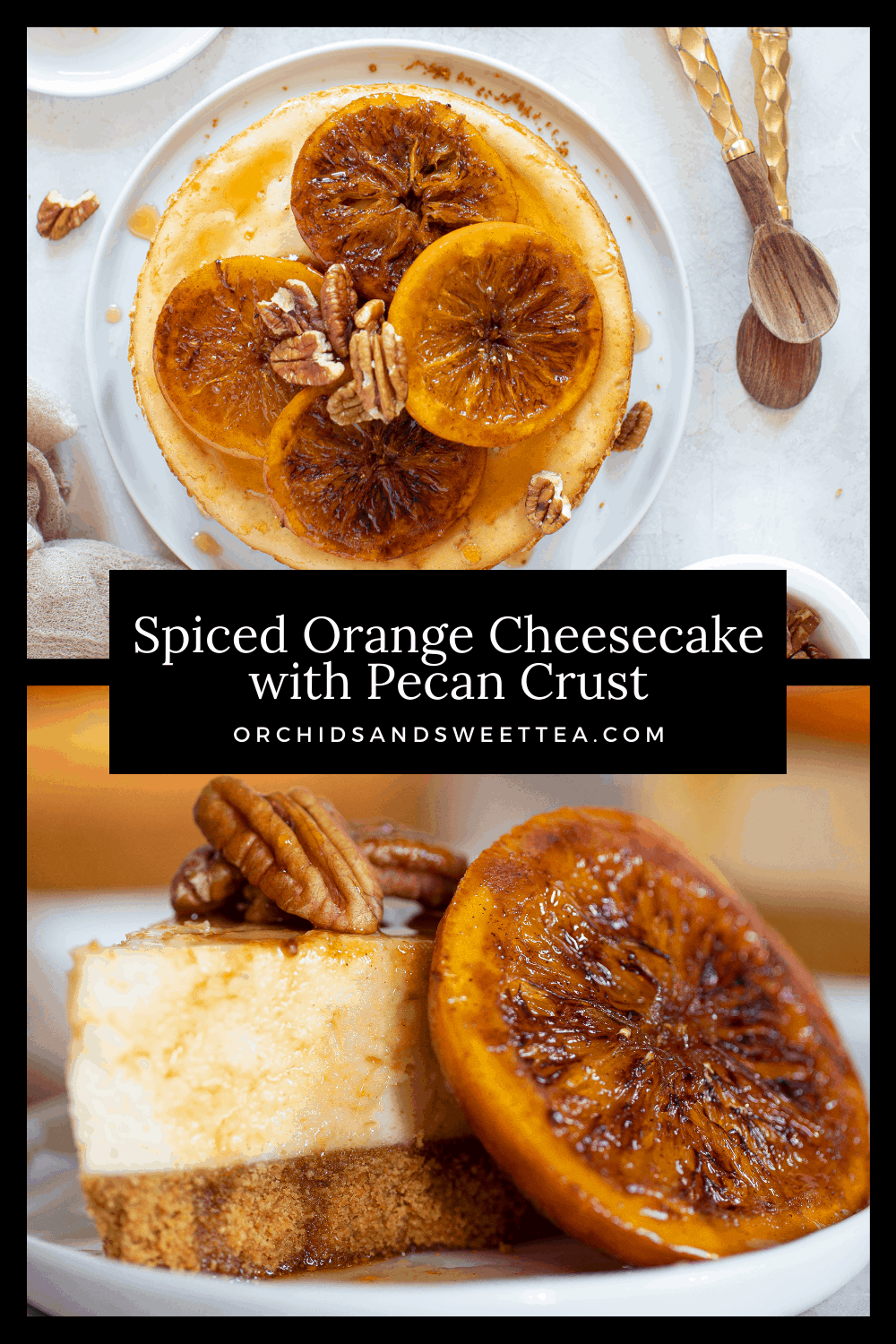